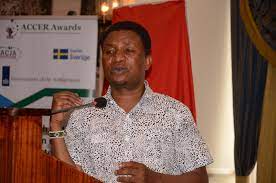 There is benefit of tackling climate-related health problems, experts attending a meeting organized by the Pan African Climate Justice Alliance on the sidelines of the Commonwealth Heads of Government Meeting (CHOGM) in Kigali, Rwanda have said.

The meeting looked into the nexus between health and climate change, with a view to accelerating action on the issue that have largely been pushed back in climate conversations and negotiations.

Dr. Philip Osano, Centre Director, Stockholm Environment Institute, Africa Center, said tackling short-lived pollutants such as methane on farms and fumes in public transport and homes could support in addressing the Paris Agreement goal of below the 1.5ºC, a critical point above which, the temperature would pose large and escalating risks to human life as we know it on Earth. Governments have used that number as an organizing principle.

Dr Osano disclosed that without policy interventions, close to 1 million people could lose their lives due to outdoor pollution.

The simulations of potential climate-related health risk scenarios from the Stockholm Environment Institute led the African ministerial conference on environment (AMCEN) to call for the mitigation of short-lived climate pollutants, emphasizing the benefits of improving air quality at a recent meeting.

“We found that reducing greenhouse gas emissions could prevent approximately 0.5 million premature deaths due to air pollution in 2030, 1.3 million in 2050, and 2.2 million in 2100.  The economic value of these health benefits was estimated at between $50 and $380 for every ton of carbon dioxide cut, which is greater than the predicted cost of reducing greenhouse gases,” said Dr Osano.

“Between 2030 and 2050, climate change is expected to cause approximately 250 000 additional deaths per year, from malnutrition, malaria, diarrhea, and heat stress,” said Dr Najwa.

According to Yared Deme, African Group of Negotiators, solutions to the health impacts of climate change need a systems approach with inter-sectoral thinking and action.

He argued that ministers of transport, agriculture, and energy should, for example, all be thinking and acting as health ministers.

According to participants, the effects of climate change further exacerbate existing social and economic inequalities including poor air, food, and housing quality, disproportionately harming the health of disadvantaged populations in both developed and middle- and low-income countries.

Young children, pregnant women, older adults, people with chronic illnesses and disabilities, and those with fewer resources, in general, all face a higher level of risk.

“In the current difficult humanitarian, geopolitical and economic context, we cannot afford to lose sight of the interconnectedness and the interplay of the issues related to and emerging as a result of the challenge brought about by climate change,” said Charles Mwangi, Acting Executive Director of PACJA.

Charles emphasized that this discourse should not be limited to human health, rather a broader approach to the nexus is important noting the implications of climate change on animal health, plan health and holistically ecosystems and the overall impact on human health.

Mwangi added that it is apparent that as a continent, Africa is still in her nascent stage of reflecting in Nationally Determined Contributions (NDC) plans the emerging disease and epidemiology geography across Africa. “With climate change we are seeing shifts in disease patterns and definitely the burden of disease will keep expanding,” he noted.

He said policy designs as such must be intentional to promote greater synergy adding that the Nationally Determined Contributions must have health related targets that provide basis for assigning climate finance and continuous monitoring.

Physical health is not the only casualty of climate change. Prof Chiotha Sosten, the Regional Programme Director for LEAD SES in Malawi said an increase in anxiety and depression is an inevitable consequence of the feeling of powerlessness in the face of existential risks brought about by climate change.

Dr Osano called for interlinking actions in addressing every aspect of the sustainable development goals as realizing each feeds into the other. ‘Climate change responses on the nexus must deliver co-benefits of cutting down both on pollution and health outcomes.