Locals bury goat's blood after body of granny is exhumed 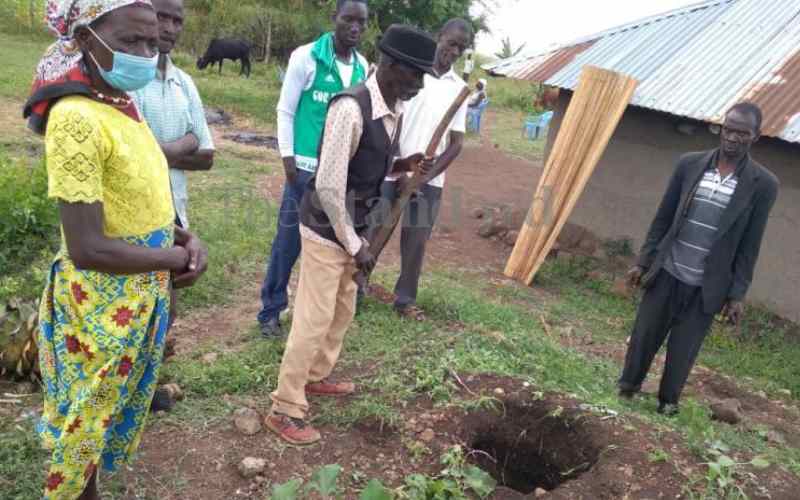 A family in Ndhiwa Sub-county witnessed a peculiar incident after the body of 93-year-old granny was exhumed.

The body of Masela Ogara who was buried in May was exhumed last week at night by unknown people.

Her body was exhumed after staying in the grave for more than one month at Osogo Village in Rachar Sub Location.

The body was discovered by Masela’s granddaughter who was going to her farm.

The woman called her husband who informed other family members. The incident drew the attention of locals.

In about one hour, the residents thronged the homestead to witness the bizarre incident. The grave was half empty.

Part of the coffin and the body from the knees downwards had been removed.

They were removed by cutting the coffin and the bones with an object suspected to be a hacksaw.

The granny’s 34-year-old grandson Michael Odhiambo said he gathered courage and got into the grave. “Parts of the body from the thighs to the head were intact. The knees, legs and feet had been cut and removed to an unknown destination,” Odhiambo said.

The incident caused fear and panic in the family.

Odhambo said they had to consult elders to guide them on how to cover the grave again. The culture dictates that a grave cannot just be covered like a normal pit.

They were advised to slaughter a goat whose blood was sprinkled to symbolize a human being.

When time for burial came, it was done according to the culture. The culture requires that if a wife is being buried, the husband becomes the first person to drop soil into the grave and vice versa.

But since the granny’s husband Janes Ogingo died about 20 years ago, they had to look for her brother-in-law to represent the husband in the ritual.

“We got a cousin of my grandfather who dropped the first soil to allow any other person to drop soil in covering the grave. This was aimed at following the normal procedure of burying a departed loved one,” said Odhiambo.

The meat of the she-goat was eaten by mourners as it is a norm in the community.

“The elders instructed us to bury some blood of the goat. Its meat was used for feeding those who were present because they were considered mourners who came to eulogise with us,” Odhiambo added.

Another grandson Peter Otieno said the incident was strange. “We did not know what those who exhumed the grave intended to do.”

The Assistant Chief of Rachar Sub-location James Adika said they had not established the motive of the people who exhumed the grave.

Adika described the act as a strange incident that had never been witnessed in the area.

“This is an incident of its kind here. Getting the courage of exhuming a grave is weird,” Adika said.

He said they had launched investigations to find out the motive of the people who committed the deed.

“We don’t know their motive, but we have started investigations to enable us to know who they are and what their intentions were.”

Secretary of the Luo Council of Elders in Homa Bay County Joram Okola said such criminals are considered social outcasts.

“The dead should not be disturbed and those who exhumed the grave are causing unprecedented trouble in their lives,” Okola said.

He added: “The dead should be left to lie peacefully in the grave because the society expects blessings from them. Any disturbance deters them from blessings those alive.”

It is always a norm in the Luo community that the body of the dead person should not be interfered with after burial.

Even if the land where someone was buried is being used for farming, the gravesite has to be left intact. This means at least a radius of 1.5 meters around the grave must be spared.