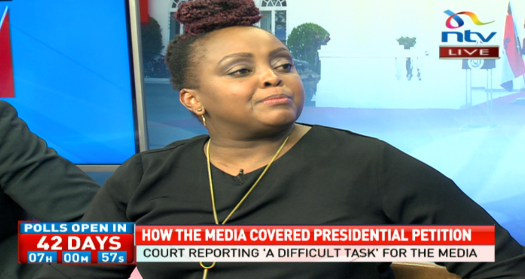 Dagoretti South MP John Kiarie on Tuesday requested the National Assembly to permit him a minute to mourn former Nation FM presenter Lorna Irungu-Macharia, who passed away on Monday.

The late Irungu, who debuted as a TV presenter on KTN in the early 90s and was laid to rest on Tuesday at a private ceremony in line with the government’s Covid-19 regulations.

As a renowned media personality, her name rekindles memories of popular 1990s TV game show Omo Pick-a-Box, the Vijana Tugutuke voting campaign and an upbeat, energetic and feisty young woman who was always ready to use her talents to champion a cause.

According to Ministry of Health regulations, all burial ceremonies should be held within 72 hours of the confirmation of death.

Kiarie described the former Gina Din communications managing director as an amazing thespian who dedicated her life to serving Kenyans through the creatives industry.

“This world has lost an amazing, intelligent, progressive and creative lady. I’ve lost a friend and colleague. The industry has lost a luminary in the person of Lorna Wangui Irungu – Macharia. A big pole to her family and more so to her amazing husband Edwin Macharia,” he said.

She is survived by her husband Edwin Macharia and a daughter, Nancy Mumbi, 12.

Macharia on Tuesday said the family was gutted by the loss and appreciated the outpouring of love and sympathy they had received following her passing away but sought privacy.

“She was a phenomenal woman, an incredible life partner, and a deeply committed citizen. My skies are missing their North Star. I am adrift,” he said.

A statement released by the family after her demise said she passed on at the Karen Hospital while undergoing treatment for Covid-19 and that her interment was slated for March 23, 2021 in a private family function.

“The family knows that Lorna is deeply loved by many and asks for continued prayers and requests for privacy during this difficult time but also informs that a public virtual celebration of her life will be organized and details be communicated shortly. We loved you Lorna but the Lord loved you more,” read the family statement.

Director-General of the World Health Organisation (WHO) Tedros Adhanom was among those who mourned her passing.

“My deepest condolences to Edwin Macharia and his family on the passing of his wife Lorna – an incredible, young woman,” he shared.

Oscar award-winning Kenyan actress Lupita Nyong’o also joined hundreds of people who mourned her by describing how they met as teenagers and what captivated her.

“I’m saddened to hear about the death of #LornaIrungu. I met her as a teenager and was captivated by her drive, her beauty, her warm smile. And how she fought Lupus so openly & fiercely changed my perception of what it means to be a powerful woman. I’ll always remember Lorna for her magnetic personality and inspiring vulnerability. My deepest condolences to her family and friends,” she wrote.