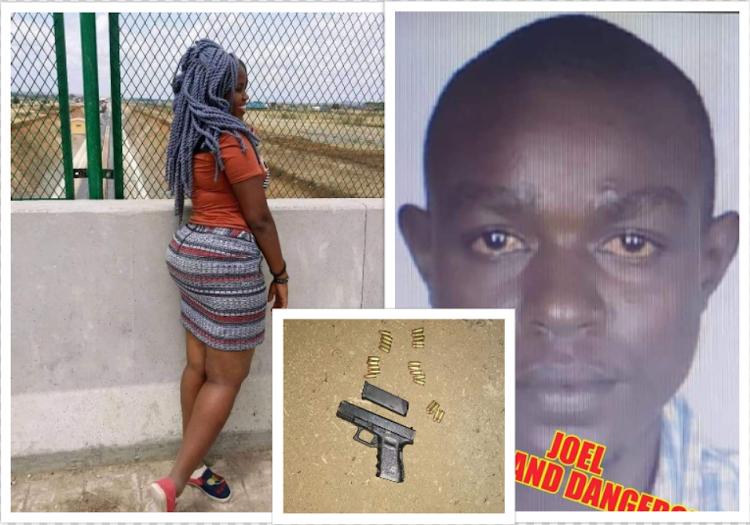 The man who shot his girlfriend at point-blank range after a disagreement was last night involved in a heated gun battle with the police.

The man identified as Joel shot actress Monicah Katee, an actress, on Tuesday 14, September 2021, at her home in Mukuru Kwa Njenga and fled the scene of the crime.

The police fingered both Joel and his pal identified as Kiarie as people of interest in other violent crimes in the area.

“On Tuesday 14th September 2021, #Joel shot dead a young woman(Monica) within #KWARE_EMBAKASI then disappeared. Together with #Kiarie among other gangsters, have been terrorizing innocent Kenyans within Nairobi Eastlands. Hii ndio mbogi ya the late #Mwane, the late #Teddy, the late #Vinny, the late #Mwaskana among other dangerous Gaza gang members.”

The thugs were accosted by detectives in the nick of time as they finalized their plans to stage attacks within Embakasi, throwing their evil plans into disarray. Like cornered rats, the thugs who were initially three scattered into different directions shooting at the detectives frenziedly.

READ ALSO  Peres Jepchirchir: My legs won me medals and changed our lives

In a statement they said, “But our men responded with precision, fatally wounding two of them on the spot as the third miscreant staged a daring escape into Mukuru kwa Njenga settlements. Determined to arrest him, detectives gave chase but the thug was lucky to jump into a sewer infested with human waste, his body riddled with gunshot injuries.

Following the operation, detectives recovered an Austrian made Glock pistol and 29 live rounds of 9 mm callibre, from one of the fallen gangsters.

After preliminary ballistic tests, it was established that the same firearm had been used to commit various robberies in the city, including the cold-blooded murder of one Monicah, who was shot five times at Mukuru kwa Njenga, four days ago.”