Lovy Longomba on life, and death of a brother 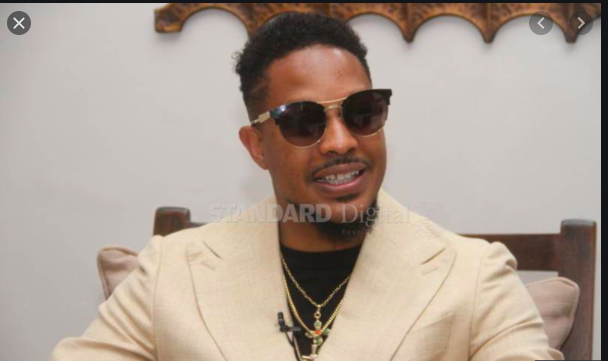 We are seated in a room decorated with soft natural light and the orange-hued portrait of a black elephant at the Palacina Hotel, just off Dennis Pritt Road in Nairobi.

The room itself is like a Rubik’s Cube, off a reception outside a restaurant with a palisade that oversees a splash of plants that bespeak paleobotany.

Inside the room, Lovy Longomba, like some feudal-musical lord long lost in Los Angeles, the overall impression of a palantine added to by the presence of three muscular guys in the room (one of them, Sammy, who used to be the non-ominous but omnipresent around Redsan), fleeting in-and-out of the room – as if attending to some unspoken business/crisis on a higher floor of the Palacina.

Lovy has grown in both girth and stature since I last saw him 16 years ago at the 2005 Kora Awards, where his brother, Christian, and himself as The Longombaz won in the ‘Best Group in East Africa’ category – riding on a long wave of hit singles starting with Dondosa to Piga Makofi, Shika Mo and Vuta Pumz.

Christian breathed his last in a Los Angeles hospital on March 13 this year.

Lovy seems taller than I remember, but maybe that’s because of the fitting suit, creamy orange like an ice-cream bouffant (same colour as the painted elephant background). His shoes gleam. He wears a gold watch, gold bracelet, golden crucifix and a gold chain against his black polo neck.

“It is said that the streets of heaven are paved with gold,” he quips. Lovy is now a Christian minister in California, with his own ‘Church of Revelations.’

“So if you don’t like gold, you are going straight to hell,” I joke.

Lovy smiles slightly, his eyes hidden behind designer sunglasses. Later, when he removes them, there will be a sheen of sadness and sensitivity there, for his gone brother. “We were born into a musical bloodline,” Lovy says. “Our father was Lovy Longomba. Our uncle is Awilo Longomba, who became world-famous for a while.”

He speaks of growing up in a 1990s where Congolese music was all the rage – the Longombas themselves being Congolese who had long resettled in Kenya.

“Christian and I went with my Dad, Lovy Longomba Senior, everywhere as children, as he performed with Mangelepe. Congolese lingala music, benga, tunes from TZ. This was the thing.”

His face lights up as he speaks of young memories at Makuti and Deep West clubs in Nairobi. “We lived in South C. Near wakina Big Pin and E-Sir. You are a Nairobi West guy, yes? So you knew Deep West and Makuti.”

Having mentioned E-Sir, Lovy goes back to that ‘Rainbow’ period of 2002-2006, when Kenyans even made it to the Top Ten of ‘most optimistic people in the world,’ before the tribal politics and bungled election of 2007 turned into the post-election violence of 2008.

And the Boomba Train derailed, secular music shrunk and shrivelled, and things went South (South African music), then West (Naija music) before coming back East – only to settle in the belly of the beast, or rather the ‘bongo’ of Tanzanian music, which loathed ‘Kenyanese.’

Boomba, pioneered by E-Sir in the early 2000s, was the sunrise of what I call the Golden Age of the New 21st Century popular music in Kenya. Nameless was a key player at the centre. Then came people like K-Rupt and girls like Tatu (Angela Mwadanda, Angela Ndambuki and Debbie Asila) with groups like Klepto for kapuka; and then Nonini and Jua Cali with the first genge wave.

Lovy talks about how Lucas at Ogopa DJs and Clemmo at Calif Records were key figures in making that first-ever wave of ‘celebrity culture’ work, alongside magazines like Pulse and radio Djs like Shaffie Weru. “It was just a fresh, exciting and experimental era,” Lovy reminisces. “There was hard work to be done in the studio, but musicians did it with joy, and we were all a big new ‘celebrity’ family ….”

Lovy, though, had always seen music as a birthright that he would give seven years to, then get on with what he considered his key life mission–not as ‘musician but as a Minister of God.’ (A joke about MoG by me flies past his ear and out of the window).

In 2006, Lovy left Kenya, and a year later, his brother joined him in Los Angeles. “I always regarded music purely as art and entertainment, whereas Christian saw it as talent and development. Christian was more in love with the music, and I, Lovy, more the Christian.”

But that did not stop Lovy, with help from his brother, from going into production in the US, getting into the system, and doing production work on projects by top musicians like Akon TIA, Mr Vegas and even Justin Bieber.

By 2013, with backing from people like a UFC Octagon legend fighter called Jones, Lovy was ready to make the move into his own ministry.

It is time to move the interview on to darker, more tragic waters.

“One day in 2015, when I was in Houston on duty, I was called and told to fly back to LA (Los Angeles) immediately, because my brother had had a terrible seizure.”

READ ALSO  'I wanted to tell the story of a poor boy from Kisii to the world,' Makori Ongechi's message after "leaving" Citizen TV

In hospital, it turned out Christian had a large tumour in his brain and he had to undergo surgery. “If you do this surgery, bro,” Lovy whispered to his brother in a hospital bed, “you may not survive it.”

“Damned if I do, doomed if I don’t!” Christian said. Then they prayed. The surgery was done and the tumor removed. For the next two years, other than severe headaches, Christian seemed okay.

Like a line from a Placebo song: “The cancer becomes malign/ but my brother’s doing fine.” But by 2018, the seizures were growing in frequency and violence. By 2019, even his sight was getting affected.

“But Christian was a real spiritual warrior,” Lovy says. “He took tons of medicines, but never complained. He was a cheerful guy to the very end. He was very amused by those singers called Sailors and their ‘Wamlambez? Wamnyonyez’.” ‘Genge tone,’ Lovy says, is a flavour of “real” Kenyan music.

Except that when he went to hospital this last time, Christian told Lovy he was so tired of the in-and-out of the hospital stays: “Maybe it is time I went home ….”

Christian’s last wish had been to do an Easter trip to Kenya, to “come home.” Now Lovy is here, alone – but for the love and sympathy of an entire country.

A damp evening breeze blows through the window of the Rubik’s Cube room in the Palacina. “You know,” Lovy says. “I don’t remember Nairobi being this humid. It’s a bit like being in Mombasa.”

It has been 16 years. A lot can change in that time. What we listen to! Even the weather.

Nagin Pattni, Kenya’s ‘Lord of the Rings’ dies at 83

No divorce for wife who became pregnant after cheating on husband