Lower Food Prices, We are Dying Out of Hunger-Kenyans 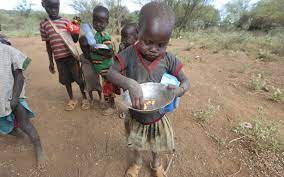 Thousands of Kenyans have taken to social media and to the streets this year to protest the rising cost of food. They have decried the increase in prices of basic food commodities such as sifted maize flour, bread, cooking oil, vegetables and fruits.

Complaints on cost of living have engulfed the country triggered by the skyrocketing cost of living that has overstretched families, with prices of basic commodities like food and fuel rising daily.

Speaking to KSN Media, David Kamau a casual labourer in Nairobi narrated his situation stating how his family of six is suffering from the high cost of living.

“The people of Kenya have become severely affected by the recent increase in the prices of food and basic commodities such as maize flour, wheat flour, cooking oil, cooking gas, milk, bread, sugar, petrol, diesel, kerosene and fertilizer. I work in industrial area Nairobi earning Kshs.500 a day, my school going kids require school fees, food and clothes from the peanuts I earn; I use bus fare to work, I pay rent and the money is really not enough. The government and leaders are focusing on politics but the common Mwananchi is really suffering,” he said.

Kenyans also want fuel prices to be brought down as it affects prices of basic commodities. Food prices have shot up tremendously due to consistent increase in fuel prices. Even as the government blames the international market over hiking, the taxes imposed on fuel by our government is way above the cost of fuel per litre that gets to Kenya from external sources.

“I today bought a packet a of Unga at Ksh. 200, Sukuma Wiki Ksh. 50, Cooking oil quarter a litre at Ksh.80, milk half litre at 60 bob and bread at 60bob. I have nothing left in my pocket and that is how I have been in poverty all along but rise in food prices is worsening the situation,” Kamau further added.

February 2022, the Kenya Food Security Steering Group’s annual Short Rains Assessment reported that there are around 3.1 million food-insecure people in pastoral and marginal agricultural areas, a 48% increase since August 2021.

People are also unable to access arable land, many have been alienated from their land illegally which has made the situation worse.

Kenyans are calling on the government and World Food Organization to save the situation.