Loyola University, which is headquarterd in Chicago, USA, plans to build a campus in Kenya to serve the East African region.

The college will cost Sh2.7 billion ($24 million) and will be built on a 75-acre plot of land in Molo, Nakuru County.

Rev Dr. Kizito Kiyimba, a university representative championing the project, stated that the university will offer programs such as business studies and data science with an emphasis on science, entrepreneurship, engineering, and education, among many others.

“The university has over 250 learning institutions across the world, with 20 in the US. The Molo one will serve Kenya and the larger East Africa region,” Dr. Kizito told Nation.

The building will be built in three phases, the first of which will begin in June of this year and end in December of 2023, whereas the other two would be finished by 2024. 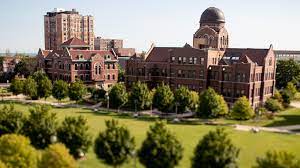 When Nakuru Governor Lee Kinyanjui met with a delegation from the Catholic-run university, he promised his commitment to the project.

“My administration will fully support the establishment of the university, which I believe will change lives in Kenya and East Africa. We welcome its construction because learning institutions are drivers of development,” said Governor Kinyanjui.

He continued: “With the establishment of the university, Molo has distinguished itself as the hub for international learning institutions, including St Andrews Turi International School.”

Loyola University, founded by the Society of Jesus in 1870, is one of the largest Catholic universities in the United States. It has more than 80 undergraduate programs and 140 graduate/professional programs.

I Always Thought I Would Be An Accountant | Kisii University Speech.