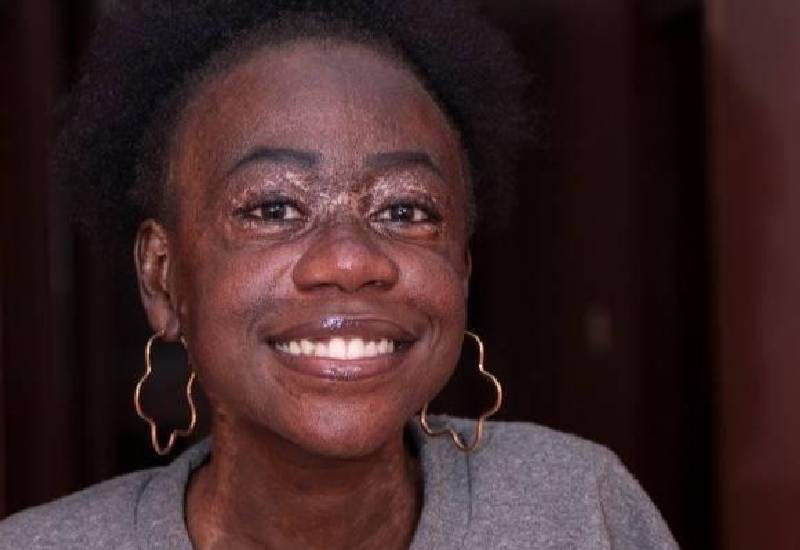 Lucy Fungaro was one of the only two people diagnosed with dermatomyositis in Uganda. She shares her story about the condition and her brave campaign to end stigma

Tell us a bit about your background.

I am a 21-year-old Uganda national, currently a third year student at Makerere University pursuing social work and social administration. I am living with a condition called dermatomyositis. It is a rare skin condition that causes muscle weakness and skin rash.

When were you diagnosed with this condition?

I was diagnosed in 2005, while I was five years old. At the time, the doctors told me that I was the second case registered medically in the whole country. I have lived with this condition for 16 years.

What causes the disease and what symptoms did you experience at first?

The exact cause of dermatomyositis is not known, but it is believed to be autoimmune, whereby the body’s immune system beigins attacking its own tissue. For me, it started as a rash on my cheeks, which then spread to my ears. I was also swelling, and my skin started turning purple in colour. I also developed asthma, and my lungs became very weak.

Is there anyone with this condition in your family?

What happened when you went to hospital?

I was only given painkillers to relieve the pain, but I was not treated. It became so stressful for me and my parents, but I am grateful that my parents never gave up on me.

How did the people around you perceive the illness?

There was a lot of stigma. The most painful part is that taxis did not want to carry us. Whenever we visited a place, people would walk out because I was ‘fat’ and purple. I was stiff like a dead body, and couldn’t do anything on my own. My father carried me all the time. People distanced themselves from me because they thought the disease was contagious.

How did you cope with the stigma?

My father supported me. He would carry me and walk for about 10 to 15 kilometres. He never put me down to rest; he would squat with me on his back then stand up and keep moving.

Where was your mother all this time?

She had just given birth to my sister; so she would take a taxi with our bags as my dad walked with me on his back. Many times, she waited in line at the hospital, and then we would join her when it was our turn to be served. It was painful and depressing for me to see my parents go through all that.

How bad was the stigma?

People called me names, and said mean things about me in school. In campus, fellow students said I was contagious, which was hurtful. However, my mother always reminded me that I was deprived of my childhood and that I shouldn’t let anyone take away my youth. Her words kept me going.

How did you resolve to become a goodwill ambassador?

I got tired of people labelling me, so I decided to tell my story hoping people would understand that I did not call it upon myself. That is how I became an ambassador to end the stigma, along with the hashtag #IamnotContagious.

Have you finally found treatment?

Yes. After getting my story aired on TV, I got responses from many doctors. At first, I went to Canada where I spent UGX350 million (Sh10.8 m) for treatment. In South Africa, I was referred to a doctor in Kenya. I raised funds on Twitter and a kind family offered to accommodate me for my entire stay. Three weeks into treatment, my skin started improving. I had over 16 surgeries and am getting better every day.

You now have a budding modelling career. Tell us about it.

I started modeling this year when my friend told me to join a runway event. It was a great feeling and from that time, I want to model. I also want to be on TV because people perceive TV personalities to be perfect. But there are also imperfect people like me who want to be on TV.

Do you have any regrets?

One time I attempted suicide because I was overwhelmed by my experience. But looking back now, that was a very silly mistake because if I had died, I wouldn’t have left the legacy that I have.

The Kenya Airlift Program Made My Dream A Reality – Alex Gichuki