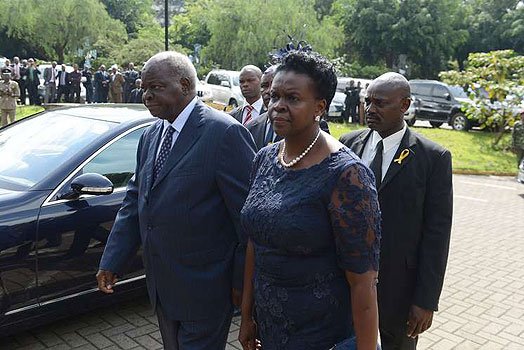 Former President Mwai Kibaki is in mourning after he lost his sister-in-law Jane Wanjiru Rika.

The family announced on Wednesday that Rika had passed on peacefully at the weekend and for financial assistance in according her a befitting send-off.

“It is with deep sorrow, but with acceptance of God’s sovereign will, we announce the peaceful transition of our mother, grandmother, sister, and friend Jane Wanjiru Rika (Nee Kagai) on 15th May 2021,” an obituary in the dailies read in part.

The deceased was the wife of the late Captain Josephat Rika and sister of former First Lady Lucy Kibaki, who died in 2016 while undergoing treatment in London.

The family has opened an M-Pesa pay-bill where well-wishers can deposit their contributions ahead of her burial on Tuesday, May 25 at her home in Naromoru.

Kibaki succeeded his former boss the late Daniel Moi in 2022 and ruled Kenya for a decade before handing the baton to Uhuru Kenyatta in 2013.

Prior to his election as President, Kibaki had also served as Moi’s vice-president for 12 years. He was also appointed Minister for Health and Finance and remains the best-paid serving and retired public servant with his pension and other perks totaling Sh35 million a year.

He also has other perks like fuel, house, and entertainment allowances, while his children are known to be successful business persons.

Kenyans though have cultivated the culture of joining hands in contributing to send off their loved ones regardless of stature.