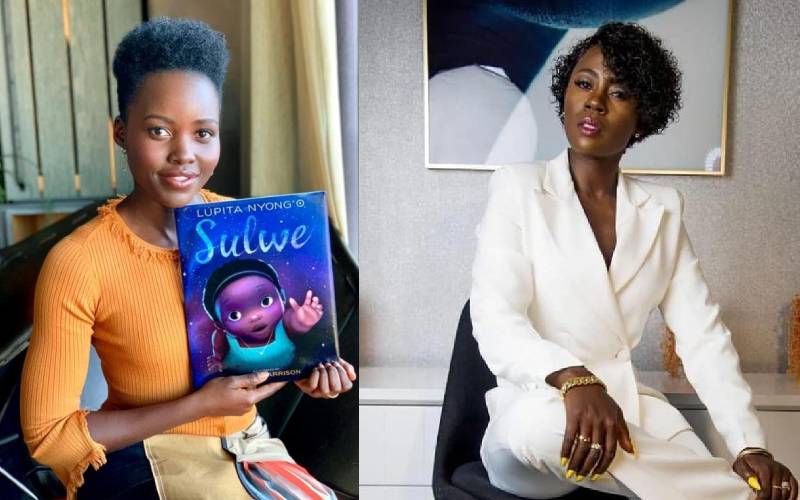 US-based Kenyan actress Lupita Nyong’o has opened up about colourism, a topic that evokes debate in February, a month when Black history is celebrated.

During a joint live Instagram show with celebrated Kenyan artiste and entrepreneur Esther Akothee, the multiple award-winner and international model said she used to be teased because of the colour of her skin. Their discussion was largely centred around Lupita’s recently released children book, Sulwe.

“That is why I wrote it (Sulwe). When I was growing up, I got teased for my skin but I also had a sister who was born after me and her skin was lighter than mine,” said the the Oscar award-winning actress.

“When I was five, I felt there was something wrong with my dark skin; ‘I am surrounded by dark-skinned people but how come it is not associated with beauty?’ So I started doing a lot of things that Sulwe was doing in the book.”

Lupita went ahead to state that she never really got to see dark skin in children’s books, and that was the reason she wrote Sulwe; to help children know that they are beautiful.

“When you are young, at the time before the world tells you what you are worth, your parents and yourself, you have an opportunity to build yourself up. So yeah, that was the inspiration,” she said.

“I mean, I love children and I hope my window for having them has not passed, but … because I was hurt as a child by my skin, I felt that writing this book would make my wound my weapon. That was almost a way to heal the wound inside myself, but also provide for children today.”

A New York Times bestseller and featured in its own episode in the Netflix Bookmarks: Celebrating Black Voices show, Sulwe is aimed at young girls struggling with identity issues.

The book profiles Sulwe, a dark-skinned girl who wants to be as beautiful and desirable as her family. To achieve that elusive goal, she goes on a magical journey into the night when everything about her changes forever.

Using amazing illustrations, the story teaches children about learning to embrace their unique beauty, which comes from within.

The book that has been translated, published and distributed by Bunk Books and themed around colourism and self-esteem is now available in bookshops across East Africa, with pricing starting at Sh1,190.

Illustrated by Vashti Harrison, the book has receive a Coretta Scott King Illustrator Honour Award and an NAACP Image Award for Outstanding Children’s Literary Work after it was released.

Speaking on the book’s title, Lupita revealed that Sulwe, which means stars in Luo, was inspired by her mother.

“I remember walking with my mother at night. She would gaze at the stars while referring to them in Luo. I have always loved the sound of the word. That word, sulwe, stayed with me and I would say that if I had a daughter I would call her so – this book is my first child.”

Lupita further revealed that Sulwe would be made into an animated musical film in a partnership with Netflix in a bid to reach a wider audience.

Writing the book was harder than she initially imagined, Lupita revealed.

“I found that writing a book is harder than it appears. I thought I would be done within a weekend, but it took me two years as you have to distil complex ideas into simple language. I wanted it written in Swahili and Luo as I wished I had more children’s book in our national language. It is a pity we ended up developing the colonial language (English) while neglecting our native languages,” she said.

During the discussion, Akothee also revealed she had tried to lighten her skin tone.

“We were living in Nairobi (and) I was still married. I used to go to church and see all these light-skinned mothers. I did not know they were Bantus (and) it is all about adaptation features to survive on planet Earth. That is why most Nilotic people are dark – because of too much sun,” Akothee said.

Later, the flamboyant musician and businesswoman sent out birthday wishes to her daughter, Rue Baby, a commercial model.

In her message, Akothee advised her daughter to consider walking down the aisle, saying: “Marry if possible so you do not end up like your mother. Single parenting is not a thing of pride, it is by circumstance, but we do not regret.”