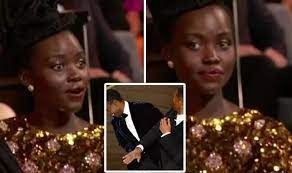 Lupita Nyong’o, a Kenyan actress, was in the audience for the Oscars drama. Will Smith stormed the stage, slapped comedian Chris Rock, and then returned to his seat, and her response was recorded on tape.

The Oscar winner for Best Supporting Actress in 2014 for her part in 12 Years a Slave – who was in there to give the Best Costume Design award in 2022 – seemed surprised as she watched Smith’s tirade.

Cameras caught the 39-year-old actress appearing uneasy as she sat inches away from Smith on stage as he yelled at Rock.

Many people shared images of her astonished reaction on social media, with one person writing: “Give Lupita best-supporting actress for her work tonight.”

Smith was heard saying in unedited footage: “Keep my wife’s name out your f***king mouth.”

‘Wow.’   Rock could be heard remarking, after the assault “Will Smith just smacked the s**t out of me.”

The actor was in attendance for the ceremony, where he was nominated for – and won – the Best Actor award for his portrayal of Richard Williams in the tennis biography King Richard.

Smith will not be arrested, according to LAPD, since Rock has refused to press charges.