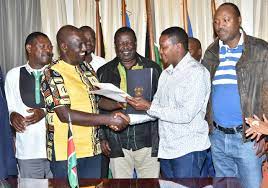 Addressing journalists on Monday morning in Nairobi,  Mutua cited mischief, dishonesty, and attempts to short-change them.

“Maendeleo Chap Chap entered into the Azimio wagon committed to the principle of fairness and inclusivity; our party is a party on an upward trajectory. This has not been the case,” Mutua said. 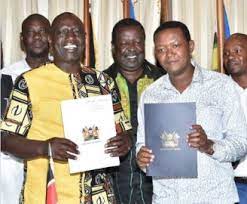 The greatest reason why Mutua left Azimio said the document signed by affiliate parties has been hidden from their eye and this is why he reads mischief. He also cited exclusion in the Coalition’s affairs which they ought to be consulted. Mutua who has consequently been denied the opportunity to speak in Azimio political rallies said his relevance may be recognized and appreciated by the Kenya Kwanza team.

“As a party, we have four members of Parliament, a governor and a deputy governor, and more than 40 Members of the County Assembly (MCAs). The zoning means we will be denied our democratic right, seats, and the political parties’ funding enshrined in the Constitution,” Mutua added.

He alluded that five more parties are planning to quit the Azimio coalition and join Kenya Kwanza. Mutua said he decided to join the Kenya Kwanza Alliance led by Dr. William Ruto because he is visionary and that he is convinced beyond reasonable doubt that he is the best leader the country can have.

“I have indeed been a strong critic of the deputy president but now I’m convinced that he is the best candidate for this Nation. That’s why I decided to work together with him.”

On breaching the six-month rule, Mutua said, “The law as it stands doesn’t hold any water because it was signed within the six months and any court will tell you it’s null and void.”