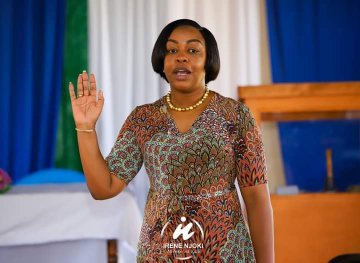 Irene who is contesting the seat on the Jubilee target is the only female candidate in the race and will take on incumbent Kimani Ngunjiri.

The Saccos boasts of over 10,000 members in total and operate mostly within Nakuru and the neighbouring counties.

The event which happened on Friday brought together all Sacco leaders and transport stakeholders in Nakuru County.

Irene promised to ensure that all Sacco members have medical cover and are able to gain access to credit.

“Once elected l will work closely with all Matatu Saccos in Bahati to streamline the Matatu sector and also look into the welfare especially on medical cover and access to credit,” she said.

Irene is contesting on the platform of opportunities to youths and uplifting the education standards in the constituency.