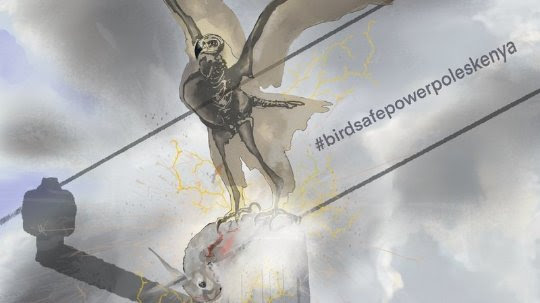 A lobby group namely Change Organization has called upon the government of Kenya through the power and lighting company to make power poles and cables safe for birds.

Electrocution by power poles is the fastest growing threat to raptors in Kenya.  Birds of Prey have undergone significant declines  since they were first surveyed in Kenya in the 1970s, with many species showing declines of over 70% (Ogada et al, 2022).

Electrocution is one of the leading causes for these declines and immediately addressing these threats is crucial to preserving these magnificent birds.

Kenya’s energy consumption is expected to increase by more than 6x fold, by the year 2031.  Also part of that plan is to dramatically increase the delivery of that power by new transmission cables, traversing landscapes heavily utilized by birds of prey.

According to research, 50% of the living birds brought to the Soysambu Raptor Centre, one of Kenya’s principal bird hospitals and rehabilitation facilities, have been electrocuted while many are brought in dead, having all ready succumbed to the horrible injuries and burns associated with electricity.

“Power distribution travels on overhead pylons and power poles that many birds of prey tend to use for hunting and perching. Electrocution and shock tend to occur on the smaller distribution poles rather than the larger transmission lines which pose more impact threats. When the smaller distribution poles are constructed in a hazardous configuration they become deathtraps especially for perch hunting birds of prey. This is especially acute when they are on the new cement poles that are reinforced with steel.  When some birds land on these poles and drop a wing to the lower wire, they complete a circuit allowing the current to travel through their body. The poles are most dangerous when it is raining.   The shock typically burns a wing and an opposite foot in a pattern that rehabilitators have sadly become very familiar with. Sadly the majority of shocked birds are able to fly a distance but tend to die of tissue death or necrosis at the site of their injuries. This often happens far from the site of the shock,” said Christiane James while asking Kenyans to sign his petition.

Chrtistian asked same poles be constructed in a safe configuration and need not kill any raptor if done properly.

Christian said the solution is simply to lower the lines on the poles to 1 meter from the top so that no species of bird can touch the lines when perched.

“For existing poles that are configured dangerously, simple baffles can be placed on the poles to discourage perching.  In places where the wires are too close, plastic coating can be put over the wires for a short distance.  The cost to rectify these lines would be minimal and a small investment toward avoiding the legal responsibility for the sharp declines that these internationally protected species are experiencing,” he further added.

Related Topics:Newssecurity concerns
Up Next