Mali ya wenyewe: Millicent Omanga's hilarious response to fan who asked to date her 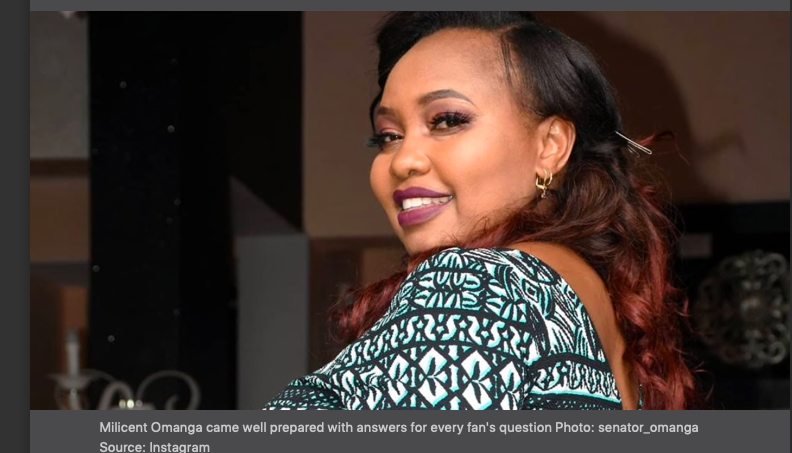 Nominated senator Millicent Omanga appears to have many suitors who wish to be in the MP’s glamorous life.

However, the curvaceous legislator is already taken and does not fear disappointing a few souls on social media as long as they understand her position.

This was the same energy she applied during a Q and A session with her fans on Instagram when one poured out his heart saying he wishes he could date Omanga.

Responding to the post in a polite and also funny manner, the senator speaking in Swahili, started off by laughing a little before telling the suitor she was somebody else’s ‘asset’.

In another slide, a fan asked Omanga how she handles shade thrown at her for being a woman in politics and she bravely said she is never bothered by such.

“That does not worry me, they can talk however they want because whoever they talk about is not me! I know what I stand for and my vision is clear,” she noted.

The lawmaker also noted the reason why she never shies away from showing off her curvaceous self is that she was so blessed and did not understand why such blessings should be hidden.

After earlier being compared to a roasted chicken due to the enviable curves, a few weeks back, the politician went viral after sharing a photo of her preparing a chicken at home for dinner.

While this could have passed as a normal post, for Omanga, it was totally different considering how Kenyans recently labeled a roasted chicken Omanga Special due to its curvy nature synonymous with the politician.

Hilarious feedback regarding the meal she was preparing and who was going to partake in it flooded her comment section with some reminding her of her previous trends.

READ ALSO  How we found out about daughter’s hearing loss
Related Topics:Milicent Omanga
Up Next

VIDEO: I married a stranger coz my parents arranged it – Kenyan woman