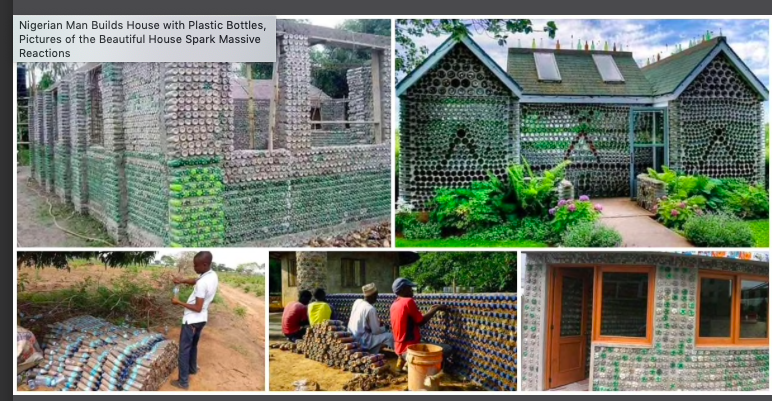 A Nigerian man has generated mixed feelers on the internet as he constructed his house with plastic bottles.

The yet-to-be-identified man was the centre of discussion in a Facebook group Igbo Rant HQ as a member of the group, while sharing pictures of the plastic bottles house, posed a question to the ladies:

“As a lady can you leave with your man in a house made with an empty bottle filled with sand ?”

In the pictures he shared, the man first filled plastic bottles with sands, which took bricks.

The sand-filled bottles were then placed on each other just like bricks. It was, however, not clear if cement was used in ensuring the plastic bottles held together.

It was also observed that pieces of wood were used to make the windows and entrance door.

The beautiful structure got mixed reactions from men and ladies alike. While some hailed the man’s creativity, others expressed fear that heavy rain may be the end of the house, and as such, it is not safe for human habitation.

“The house no follow i beg…. the cement is not strong on those containers and when heavy rain with wind fall you will see.”

“This is so creative . Besides Dangote cement dont cost. But can it stand the test of time?”

In a separate story by TUKO.co.ke, a woman is known as Rosemary Akora built a breathtaking brick-walled house to replace her parents’ old residence.

She then shared the photos of the exterior part of the home and if that is not enough inspiration, then tell us what is.

The walls were coated in a beautiful shade of orange mixed with a touch of lime.

The grass outside was well maintained, and the environment was simply serene, as seen in the photos shared on social media.

Miraa: How the green gold of Meru became Nairobi’s pastime