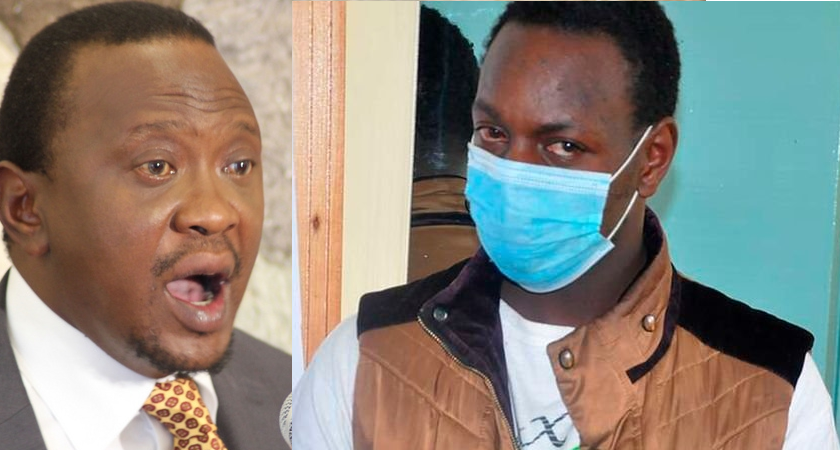 A man appeared before a Kiambu court on Monday over a threatening social media post in which he threatened to shoot and kill President Uhuru Kenyatta.

Simon Muchiri, 22, was charged under the Computer Misuse and Cybercrimes Act with misusing the social media platform by publishing the remarks that are deemed detrimental to the office of the president and the people who occupy it.

Mr Muchiri was arrested by security officers after reviewing his page and later tracking him down using his mobile number.

The accused, however, denied the charges and was released on a cash bail of Sh200,000 or similar bond terms by Kiambu principal magistrate Grace Omodho.

His lawyer had pleaded with the court to release Mr Muchiri, saying he is a young adult and a first-time offender who his family relied on to put food on the table.

The magistrate, while releasing the accused, set March 15 as the date when the case will come up for pre-trial hearing where the accused will be furnished with all the evidence that the prosecution team intends to use in court.

The case will subsequently go for full hearing on May 13.

This is not the first time someone has found himself in hot water for abusing Mr Kenyatta.

In 2015, for instance, Alan Wadi Okengo, was jailed for insulting the president. The then fourth-year university student was sentenced to two years in jail for posting unprintable insults against president Kenyatta on social media.

The Moi University student was arrested as he attempted to sneak out of the country through the Busia border.

In late 2017, Embakasi East MP Babu Owino was arrested for using derogatory words against Mr Kenyatta at a political rally in Dagoretti North.

He later denied charges of subversion, uttering abusive words towards the president and incitement to violence. The MP also spent two nights in police cells.

Last year, two security guards working at the Sarova Stanley Hotel were charged with unauthorised interception of computer data under Section 17 (1) of the Computer Misuse and Cyber Crimes Act after footage of President Kenyatta and ODM leader Raila Odinga inspecting a deserted Kenyatta Avenue by night leaked and went viral on social media.

Ms Janet Magoma Ayonga, a CCTV controller, and Patrick Rading Ambogo, a security supervisor,  were suspecting of leaking the video.

In August, a city businessman, Sandeep Ranjkant Desai, was found to be in contravention of Section 37 of the Computer Misuse and Cybercrime Act of 2018 after allegedly sending his nude images to a former lover.

Mr Muchiri becomes the latest suspect to be charged under the Computer Misuse and Cybercrime Act, which seeks to bring sanity to Kenya’s cyberspace.

The law, which was challenged in court by the Law Society of Kenya on grounds that it limits freedom of speech, outlaws deliberate publishing and sharing of false, misleading and threatening messages.

Two bloggers — Robert Alai and Cyprian Nyakundi— have been charged under the Act.