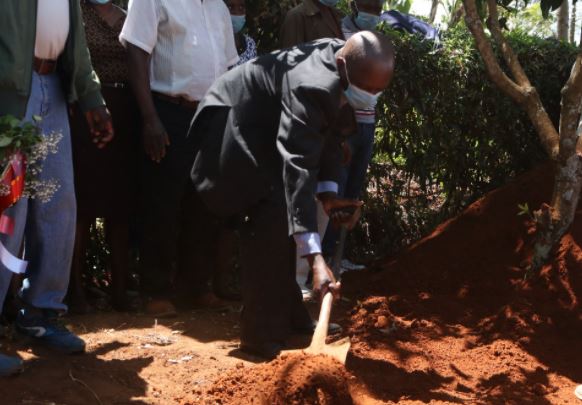 A funeral was momentarily interrupted when the husband to a teacher who succumbed to Covid-19 complications collapsed.

James Kimotho was overwhelmed by emotions and could contain himself. The funeral service halted for a few minutes as mourners helped him to a vehicle and rushed him to Kianjokoma Sub-County hospital in Embu County.

He was attended to and later joined the mourners at his home where the wife was being buried.

Kimotho who had spoken to The Standard a day before said it was a big blow to lose his wife of ten years.

61-year-old Lucy Wawira, a CRE and Kiswahili teacher who has been teaching at Kavutiri for the last 12 years complained of headache and cough when she sought permission from the school to seek medication.

“After visiting several health facilities in Embu, Wawira was transferred to Komarock Modern hospital in Tharaka Nithi County where she succumbed,” the husband narrated.

He said they had been tested and were waiting for the results, which seemed to delay.

At the school, Public health officials were busy fumigating as class eight pupils were preparing for KCPE exams set to begin on Monday.

“The pupils were really affected and there was stigma all over forcing the school to close earlier than expected,” a parent said.

Ogamba said they had put up necessary measures to protect the pupils as they prepare to sit their national examinations.

“The teachers and subordinate staff have all been tested. We are waiting for the results. We have also increased the number of vehicles to transport the exam to ensure there is social distancing,” he said.

Chief Health officer in Embu County Rosaline Kaugi assured that they were high on alert with the new wave and especially during the exam period.

She appealed to residents who experience any Covid signs to report to the nearest health facility.