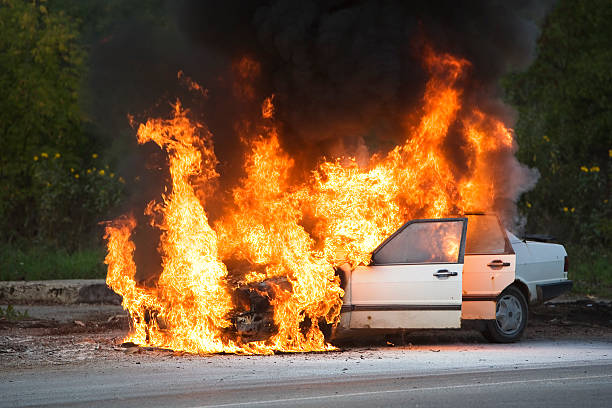 In Nasra Estate, Njiru, Nairobi County, a man died on Sunday after setting ablaze to the vehicle he was traveling in with his daughter.

Police claim that a dispute existed between Denis Musyoka, 34, and his ex-wife, Elizabeth.

He reportedly asked to have their 2-and-a-half-year-old daughter brought to his place so they could spend time together.

After Elizabeth arrived at his residence over the weekend carrying a bag, Musyoka is accused of forcing his way into her vehicle, drawing out a knife, and repeatedly stabbing her in the neck.

“The lady managed to jump out of the vehicle and was rescued by good Samaritans. The deceased then set himself on fire in the said vehicle together with her daughter, 2.5 yrs,” police stated on Sunday.

Elizabeth was taken to Mama Lucy Hospital along with her kid, where she is now in stable condition.

The kid, who is reportedly in a severe condition, has been transferred to the Kenyatta National Hospital for specialized care.

While investigators in Kayole look into the matter, Musyoka’s body was transferred to the Mama Lucy Hospital mortuary.

A knife and a partially burned five-liter jerry can thought to have held petrol were found by police at the scene.