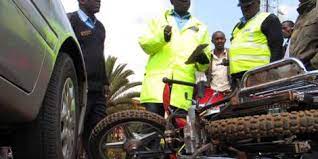 A Bodaboda rider lost his life after he was accidentally shot in the neck while trying to persuade an angry mob from attacking the Police officers.

The rider who has been only identified by one name Mose had been hired by officers from Muhoroni and taken to Oduwo village where they had gone to make an arrest.

“During the shooting one person is known by one name as Mose, a Bodaboda rider who had been hired to ferry officers from Muhoroni town to Oduwo was accidentally shot in the neck as he was trying to persuade the angry crowd from attacking the officers and he died on the spot” read part of the police report.

Three officers from the Muhoroni police post reported that they were on night patrol when they were informed around 11 pm that a woman was selling illicit brews and Chang’aa in Oduwo village.

They proceeded there and recovered 40 Litres of the brew and a sack of bhang.

While heading to the station, they were attacked by members of the public who managed to rescue three suspects –the seller only known as ‘Nyakabondo’, Lawrence Okongo, and Patrick Lumumba -and the exhibits.

On Friday at around 5 am, police officers were informed that there was another dead body on the railway line and two other members of the public who had suffered gunshot wounds.

The deceased was identified as Dodosphil Odhiambo Onyango 31, who had been shot in the pelvic area.

Jacob Ouma 29, and Mathews Ogweno had been shot on the right knee and right side of the chest, respectively.

READ ALSO  Race against time, that ended in grisly accident

Ogweno was rushed to Muhoroni Sub-County hospital but later transferred to Jaramogi Oginga Odinga Teaching and Referral Hospital in a serious condition.