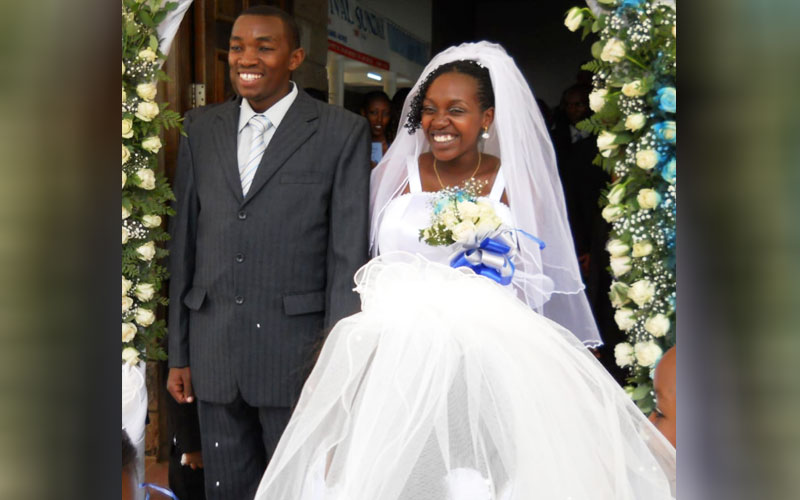 Police in Juja, Kiambu County are holding in custody a 37-year-old man accused of fatally stabbing his 34-year-old wife.

Nyaga, a mother of three, was living with her children at Everest Estate in Juja, where the killing occurred.

Kamau and Nyaga, who exchanged vows in a colourful church wedding in 2010, separated in 2019 following unending domestic fights. The two were blessed with three children (a daughter aged 11 and sons aged 7 and 2).

The couple’s divorce case was yet to be finalised.

Nyaga’s neighbour, Purity Gathoni, told The Standard that the couple’s eldest child on Sunday night knocked on their gate and requested if she (Gathoni) could help take her (child’s) mother to hospital.

Gathoni said she enquired what had happened, and the girl revealed that her father had [allegedly] stabbed their mother.

“We found her (Nyaga) in her bedroom lying in a pool of blood,” said Gathoni.

“While being taken to hospital, Esther [Nyaga] said, albeit in pain, that her estranged spouse, Evans Kamau, had stabbed her multiple times.”

Nyaga, however, died before she could get to Thika Level 5 Hospital.

The deceased worked as a nurse at the Muruka Dispensary in Kandara, Murang’a County while her estranged spouse is a former employee of the Kenya Revenue Authority (KRA).

Kamau is accused of previously breaking into Nyaga’s house on multiple occasions, prompting the 34-year-old woman to obtain a restraining order, a court decree that protects someone from being physically or sexually abused, threatened, stalked, or harassed.

On Sunday night, Kamau allegedly accessed Nyaga’s house using the back entrance and disconnected power from the main switch before attacking her.

Juja Directorate of Criminal Investigations Officer (DCIO) Richard Mwaura told The Standard Kamau was arraigned on Tuesday, August 10, and the courts allowed police a couple of days to hold the suspect as investigations continued.

“He is expected back in court early next week,” he said.

Nyaga’s mother, Magdalene Muthoni, said she hopes justice for her daughter would be served.

“I’m urging police to expedite investigations and bring my daughter’s killer(s) to book,” she said.

Nyaga’s three children have since been taken in by Muthoni.

The deceased will be buried on Tuesday or Wednesday next week at her mother’s home in Kamulu, Nairobi, family said.