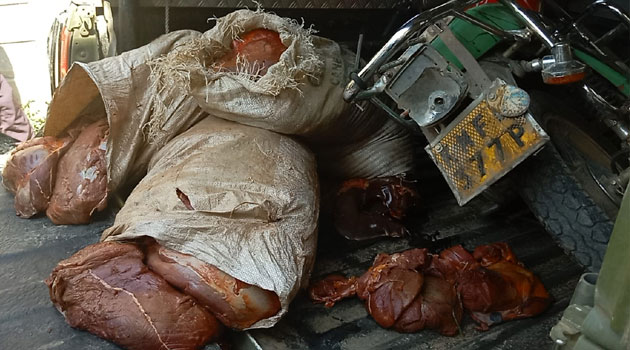 A 44-year-old man who was charged with having 170 kg of game meat in his possession in a Narok Court entered a guilty plea.

Konene Sordo, who appeared before Narok Senior Magistrate Phyllis Shinyada, acknowledged to transporting the zebra meat on an SKYGO motorcycle with the license plate KMFD 377P and packaging it in three nylon bags.

According to testimony given to the court, he committed the crime alongside individuals who were not present.

The director general of the Kenya Wildlife Service had not given the motorcycle a permit or authority to transport game meat, according to state prosecutor Tito Wanga.

The meat and the motorcycle were displayed as exhibits in court.

Following the presentation of the game meat, the prosecution requested permission from the court to take pictures of the meat and then burn it because it was highly perishable.

The defendant pleaded with the court to grant him bail so he could get medical attention after falling off the speeding motorcycle while being arrested.

The state prosecutor opposed his release on bond, arguing that since the other offenders were still at large, his release might impede the investigations.

READ ALSO  Muthoni Drummer Queen: I have never been gay
Related Topics:News
Up Next