Man strips in court, causes a stir as he argues with judge 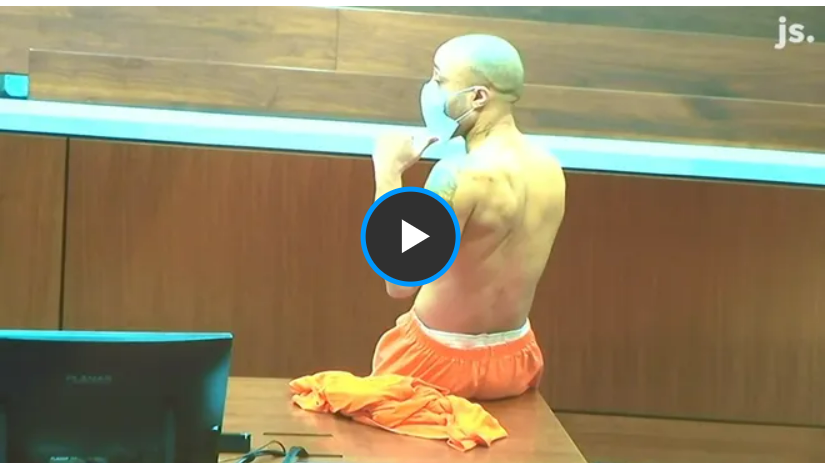 A Wisconsin man defending himself caused a stir Thursday when he stripped off his shirt, sat with his back to the camera and stuck a sign he’d been given to signal objections down his pants  before opening statements began in his trial.

Darrell Brooks is facing homicide charges for allegedly plowing his SUV through a Christmas parade.

Prosecutors say Brooks, 40, killed 6 people and injured scores of others on Nov. 21 in the Milwaukee suburb of Waukesha in Wisconsin.
During the opening statements Thursday, Brooks began the day by interrupting Dorow at least a dozen times before jurors were brought into the courtroom. Among other things, he told her doesn’t recognize his own name.

He was given a sign to hold up to the camera to signal objections, which he stuck down the front of his pants. He also claimed he needed medical help for a cut on his fingers. Dorow said there was no blood and he would have to wait until the lunch break.

Authorities  said he turned into the parade after fleeing a domestic disturbance, though officers were not pursuing him at the time. The 76 charges he faces include six counts of first-degree intentional homicide. Each of those counts carries a mandatory life sentence.

Brooks, who has been acting as his own attorney since last week is  demanding that Judge Jennifer Dorow dismiss his public defenders. His trial began Monday with jury selection.

Brooks repeatedly interrupted Dorow before prospective jurors were brought in, leading the judge to move him to another courtroom where he could watch via video and speak when she activated his microphone.

District Attorney Susan Opper told Dorow that she believes Brooks is simply trying to delay the trial. She said recordings of his calls from jail show he discusses his case with multiple people every day.
After Dorow called the jurors into the courtroom, Brooks removed his objection sign from his pants and stood behind the table with his eyes closed as Dorow began reading each charge.

“These actions are deliberate and intentional and they have escalated,” Opper said. “He’s attempting to derail these proceedings and delay the inevitable.”

“It’s very clear to this court that everything that he has done as outlined by the state and made evident on the record of these proceedings that it is the sole intent of Mr. Brooks to make a mockery of this process,” Dorow said. “I believe this trial needs to continue and should continue.”

Following a lunch break, Dorow brought Brooks back into the main courtroom. Brooks said he didn’t understand what was going on. Dorow said that she believed that he does understand and that he shouldn’t interrupt her. He stood silently for close to an hour as Dorow finished reading the charges to the jury.

Later, Brooks told the judge that the Constitution’s free speech guarantee gives him the right to talk in court. Dorow responded that his free speech rights are limited in court by the rules of decorum and legal procedure.

“So you’re making a judicial determination to deprive me of my constitutional rights,” Brooks said.

“You have a right to present a defense, but your rights are not unfettered,” Dorow replied.

They talked over each other for several minutes before Dorow had Brooks taken back to the alternate courtroom.

Related Topics:Man strips in courtNews
Up Next