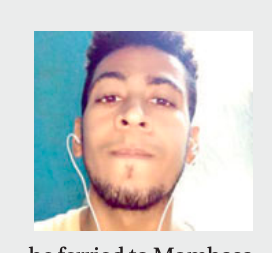 A 28-year-old man who allegedly murdered his father and put his body in a sack, has been arrested in Juja, Kiambu County.

It is reported that Mr. Majid Nagib Abdallah was arrested yesterday at Karimoni area in Juja town by Directorate of Criminal Investigations (DCI) officials drawn from Mombasa.

According to Stephen Matu, the Mombasa County Police Commander, the suspect, has been booked at Juja Police Station waiting to be ferried to Mombasa.

“It is a breakthrough for our officers who trailed the suspect after his father, 69, was reported as missing, only for his decomposing body to be discovered in the family bathroom,” he said.