Man Who Migrated To Canada In 1969 Returns To Kenya To Build Hospital, but Passes Away Soon After 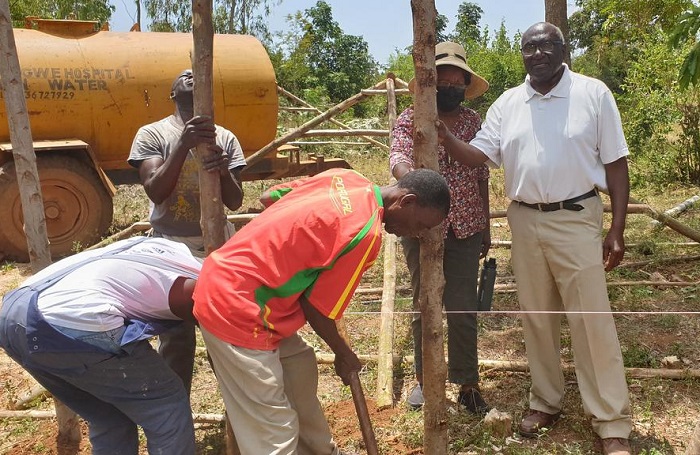 Mr Stephen Juma Obiero, who migrated to Canada from Kenya in 1969, recently returned to his motherland to build a hospital, school and more, but died before he could realize his dream fully.

According to therecord.com, after arriving in Canada, Obiero was adopted by a Toronto-based couple who gave him their last name, Scott.

Born in 1948 as the youngest of six siblings, Obiero grew up just like other village boys in Matange, Kenya.

While in Canada, he founded  the charity Caring Partners Global, and has now returned to Kenya to change the lives of everyone in his community through his charity. Stephen’s journey would be centred in faith and integrity, traits that always guided him, starting when he met the Scotts, Canadian missionaries working at his mission high school.

“He told me he was smart and likable, so the Canadians gravitated to the teen,” said Stephen’s widow, Sylvia Scott.

According to those who knew him back in the day, Obiero was the intelligent and had leadership skills. “He was the Head Boy in his High school,” said Sylvia.

The Toronto-based couple helped him enroll into Ontario Bible College on a full scholarship. The Scotts, now deceased, officially adopted Stephen and gave him their last name.

Stephen’s choice of college was less about career choices and more about exploring the faith he’d been brought up in, a faith that had underpinned everything he did.

After completing a degree in religious studies, he next earned an undergraduate degree at Wilfrid Laurier University then a teaching degree from the University of Toronto.

Stephen had returned to Kenya for visits while living in Canada. During one trip, he was introduced to Sylvia Adoyo Denge, from a nearby village. They were distantly related through marriage.

The couple married in 1974 and three weeks later, travelled to Waterloo, where Sylvia studied science at the University of Waterloo and nursing at Conestoga College and McMaster University. When both had graduated and were ready to enter the workforce, the only jobs available were in Moosonee, Ont., on James Bay. They were the only Africans in the community and spent much of their time coping with the cold for the two years they served in that remote place.

Stephen was teaching and Sylvia worked in the hospital. The first of their four children, Christine, was born in Moosonee. Joshua, Rachel and Sarah Scott came along after the family returned to Waterloo.

Stephen was eventually able to find a job teaching science at Waterloo Collegiate Institute. He retired in 2010.

“As a teacher, the kids loved him,” said Stephen’s former colleague Glenn Pascoe. Stephen had a commanding presence and everyone in the school called him “Chief.”

Despite their comfortable existence in Canada, the desperate need for help in their Kenyan community dominated Stephen and Sylvia’s conscience. Eventually a solution presented itself: to create a charity, bring in partners and fundraise. Together, the couple founded Caring Partners Global.

Years earlier, when Stephen left Africa to come to Canada, his mother made him promise he would return and give back to his community, said son Josh. And he did.

“He is the ultimate example of what it means to be a man of your word and living by example,” said Josh.

The Matangwe project has “positively impacted the lives of hundreds of people within the region, and given them hope for the future,” said Ron Bell, the charity’s scholarship director, in a tribute.

In April, the couple were back in Kenya, this time looking to build a maternity unit. Plans were halted when Stephen fell ill with cerebral malaria. All four children rushed to Kenya, arriving in time to say goodbye before their father died on April 18.

“It was sudden and unexpected,” said Sylvia.

The couple was able to have a small house built in Matangwe where the family will stay when visiting the project. The house represents Stephen’s connection to home. Sylvia will continue running the charity.

“I promised I would keep the legacy going,” she said.

Stephen “had an optimistic outlook on life,” recalls Rachel about her dad. “He was always striving to do more and inspiring us.”

Though Sylvia and Stephen grew up in rural villages, they didn’t presume to know what the Matangwe villagers needed, and asked for guidance. Stephen also wanted to ensure villagers were engaged in the project and that they would find their own way to support the program.

Stephen was skilled at building relationships, Sarah said. He recruited Glenn after learning he’d installed solar power at his cottage. Before long, Glenn was in Kenya, installing solar panels. He later joined the charity’s board.

“He was very engaging that way,” said Glenn.