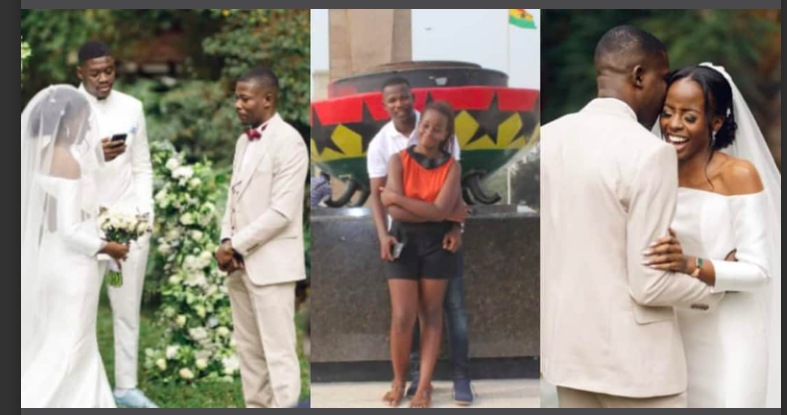 Fate has an interesting way of bringing two souls who are meant to be partners together, and in the most unexpected ways.

In one such case, a young man recently took to social media to share beautiful photos of his gorgeous bride and himself on their wedding day.

Twitter user @peratov narrated on his page how he met his bride six years ago when he volunteered as a tour guide, and that one-time tourist is now his wife.

He also expressed his appreciation to a name he mentioned as Mageda, and as much as he didn’t clarify who the name belonged to, all signs pointed to it being his wife’s.

“I volunteered to be a tour guide for a day. Six years later, the tourist becomes my life partner. Thank you Mageda,” read the caption.

Tweeps who saw his post and the story behind it headed to the comments section to wish him well and inform him of their plans to change careers.

“Congratulations. Quick question; is that first frame you doing your tour guide duties? You were all on a date.”

“Boys, we’re in the wrong line of works.”

“Adding tour guide to my profile.”

“Charley, please check this out, looks like we should all become tour guides.”

“Okay. We are not going to talk about how that wedding dress is so gorgeous on her.”

Another met and pursued his lover in church

In another recent story, a man named Bayo Lawal disclosed that eight years ago, he went to church to seek God’s face but got much more.

This is because the fellowship leader’s eyes fell on a beautiful woman with whom he fell in love at first sight.

To get her attention, Bayo sent a love note on her birthday but the lady took ages to get back with a reply.

As much as she took a long while to give a nod to his advances, accepting him has made them a wonderful couple that is still solid years later.