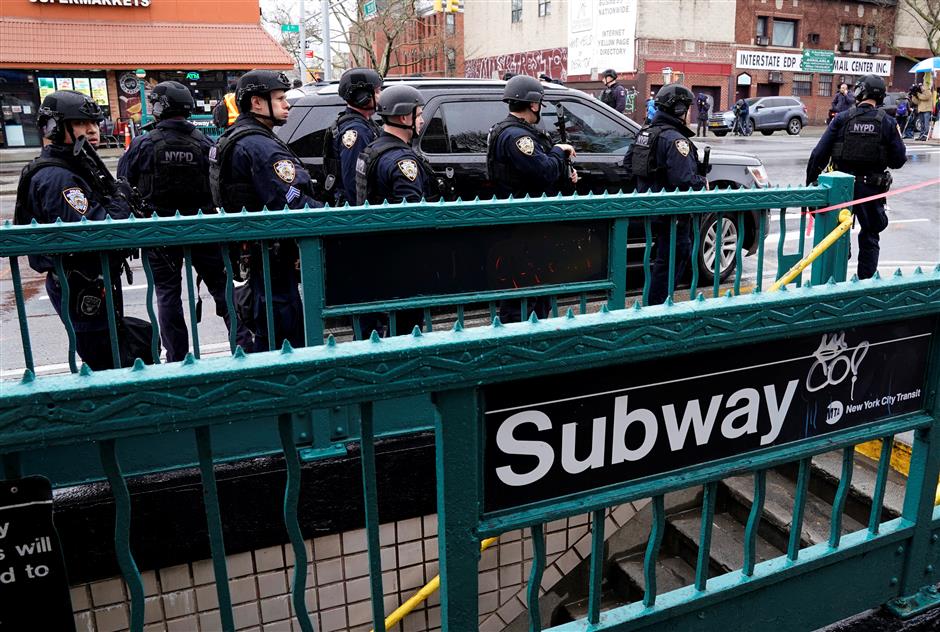 A huge manhunt was launched in New York on Tuesday for a man who shot ten people on a crowded subway train while wearing a gas mask and setting off two smoke bombs before opening fire on panicked riders.

The event in Brooklyn is not being probed as a terrorist attack, according to police, and there is no evidence of a motivation at this time. There were no injuries that were regarded life-threatening.

Commissioner of the New York Police Department, Keechant Sewell, said during a media briefing that the accused gunman put on a gas mask as the subway approached the terminus.

According to Sewell, the gunman “opened two canisters that dispensed smoke throughout the subway car.” “He then shot multiple passengers as the train pulled into the 36th Street station.”

Officials said that in addition to the ten gunshot victims, 13 people were hurt as they attempted to flee the station or suffered from smoke inhalation.

“We are truly fortunate this was not significantly worse than it is,” Sewell added.

The gunman fired 33 rounds, according to NYPD Chief James Essig. A Glock 17 nine-millimeter handgun, three more ammunition magazines, and a hatchet were later discovered at the scene by police.

Sewell stated that they had discovered a “person of interest,” who was characterized as a “dark-skinned male” dressed in a neon orange vest and a gray hooded sweatshirt.

She stated that no one was being held in custody.

The person of interest, according to both Sewell and Essig, had put multiple videos on YouTube of himself giving extended, often furious political tirades. He further chastised Eric Adams, the mayor of New York City.

The train pulled into the 36th Street station, with smoke spewing out the doors as passengers raced out, some reportedly injured, according to verified surveillance tapes posted on social media.

Putin claims that Russia ‘had no choice’ in Ukraine