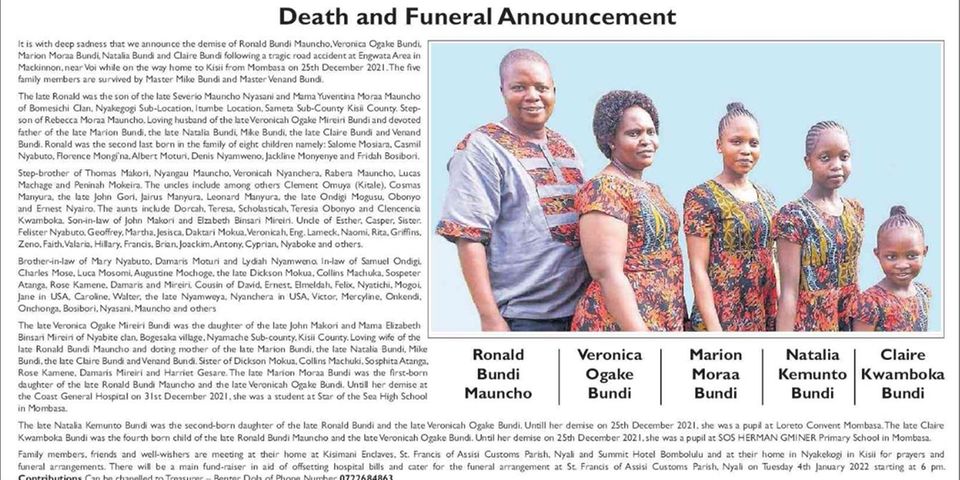 A sombre mood engulfed St Francis of Assisi Customs Parish in Nyali, Mombasa, yesterday when relatives and friends held a memorial service for five family members who perished in a road accident on the Mombasa-Nairobi highway on Christmas day.

The congregants, including the clergy, were overwhelmed by grief and tears flowed freely when two sons who survived the accident were wheeled into the church to view bodies of their parents and three sisters ahead of their burial.

The family was travelling from Mombasa to Kisii county for Christmas celebrations when the accident occurred at Mackinon area near Voi.

The two sons, Mike, 10, and Venard, 3, who survived the accident, could not hold back tears as they viewed the bodies from wheelchairs. They are unlikely to make it for the funeral.

The two boys were taken back to the wards by medics who had brought them to the church for the brief viewing ceremony.

The two, who narrowly survived in the deadly accident, are nursing their injuries at the Coast General Hospital and doctors confirmed they are in stable condition and could soon be discharged. 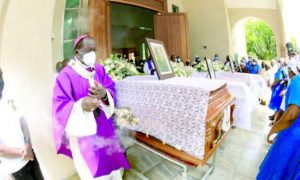 Wailed uncontrollably
Also overwhelmed by grief were students from the Star of the Sea Secondary School where Marion was a Form 4 student. She passed away on Dec 31, while receiving treatment at the Coast General Hospital.

The students, who were accompanied by their teachers, wailed uncontrollably when they got an opportunity to view the bodies during the holy mass presided over by Catholic Archbishop Martin Kivuva of Mombasa archdiocese.

“Marion Moraa was my student. I was close to the girl because she was an exceptional performer. She was hardworking and very obedient. Our school is mourning her demise,” said Judith Kwamboka, Moraa’s English teacher.

Representatives of Loreto Convent and SOS Hermann Gminer Primary School where Natalia Kemunto and Claire Kwamboka schooled also paid tributes to the departed girls, describing them as hardworking and intelligent.

In his homily to the fully packed church, Archbishop Kivuva described the family as true servants of God who served Him to their fullest.

Until his death, Bundi was a strong Christian and a commissioned member of the Catholic Men Association (CMA) in the Archdiocese of Mombasa.

“The church has lost true servants of God and it has saddened everyone. They were not only active in church, but they were also active participants in church activities. They are friends of Jesus, whom they have gone to be with,” said Kivuva.

The prelate asked the congregants to stretch their hands and spirits to pray for the family and their loved ones who depended on them for a living.

Paying their tributes, Catholic Church faithful and friends described Veronica Bundi as a pleasant person who worked with other church members diligently in the parish to accomplish church activities.

“We have lost a member who held a very important position in the CMA and, therefore, it’s a loss to us as an association. Bundi was one person who was a key player in matters of the church,” said Father Maxwell Okello of the Assisi Parish, the church where the family worshipped.

Bundi got married to Veronica in 2001 and both were dedicated Catholic faithful. He was a distinguished contractor who had completed several projects in Mombasa and South Coast while his wife was a businesswoman who operated tailoring and M- Pesa business in Kisimani in Bombolulu are. The family perished when the car they were travelling in exploded into flames after a head-on collision with another vehicle that was headed to Mombasa from Nairobi. Two occupants of the other vehicle also perished on the spot.

The bodies of the five will be airlifted to Kisumu and driven to the Kisii Teaching and Referral Hospital mortuary today ahead of the burial at Nyakegogi village in Sameta, Bobasi constituency, tomorrow.

The family has prepared a mass grave for the family.

PHOTO: Speaker Muturi appears in Parliament in a unique sling