Massive Boost for Ololtua ahead of UDA Party Primaries 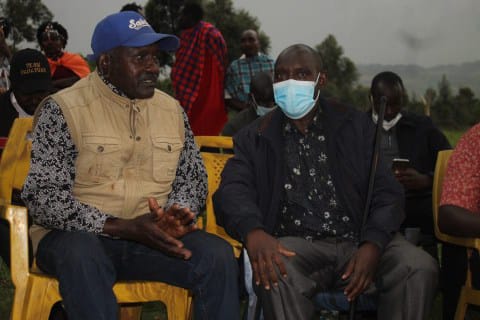 Former Rift Valley Education Commissioner John Lekakeny Ololtua political journey got a boost today after a section of youths and elders from Kilgoris endorsed him as their next Mp.

Speaking at a Kilgoris hotel early today, most of them described the former RC as a performer and urged said that they will elect him in the August general elections.

“We are not only eyeing the nominations, but we are going to elect him as our next Mp in August because of his development records not because of the party,” said Joseph Kandie, the chairman of the group.

Kandie said that during his tenure as the RC, Ololtua improved the education sector as most of the children were able to access education.

“Since he was appointed as the RC, we have seen an increase in the number of schools going children, he has fought the issue of FGM and he has also reduced the rate of insecurity in our area. We need to fix this country right away from education to health to infrastructure. I urge all our youths here in Kilgoris to utilize their talents and better their lives,” he said.

Patrick Sepei, a cleric urged residents to move out in large numbers and elect the RC as the next member of parliament.

“This man is a performer, you remember he almost achieved the100 percent transition in Rift Valley by ensuring that a large number of pupils joined form one,” he said.

Speaking during the event, the RC vowed to fix the problem of water shortage, lands, garbage collections, education by providing bursaries and looking ways of creating employment among the youths.

“You all know that during my tenure, we achieved 100 per cent transition target, Now once you elect me as your MP, we are going to do our best to achieve our goal of educating our children. I call upon every parents to take his or her voting card and case for me, you won’t regret once you do that,” he added.