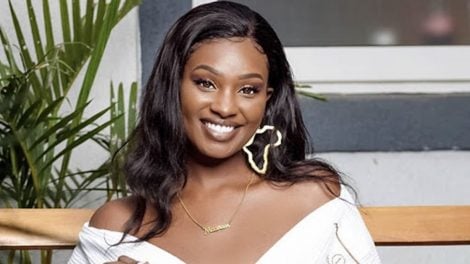 Maureen Waititu has showered her man with praises and sweet words, describing him as a ‘King’ who has so far supported him through thick and thin.

The popular vlogger was recently spotted enjoying some good moments with her new catch on social media.

The photos come months after she was involved in a dramatic break-up with her baby daddy namely Francis Kiarie, commonly known as Frankie Just Gym it. The couple has two children.

“I am (now) loved and appreciated,” a beaming Waititu told Terryanne Chebet via a YouTube interview.

Adding: “When I say he is a king, he is. He is everything that I prayed for because I prayed for it. I had a list and he ticked every box.

The mother of two also shared the challenges she has faced in between the time Frankie moved out of her life and before she chanced on the mystery man.

“I have struggled with mental health depression, anxiety, and having a person you can openly tell is something good. And out of nowhere, he came into my life.”

“He is my greatest cheerleader and my greatest fan. I got tired of trying to push him away and got comfortable. He is amazing.”

Frankie has since also moved on with socialite Corazon Kwamboka. The couple is expecting their second child.