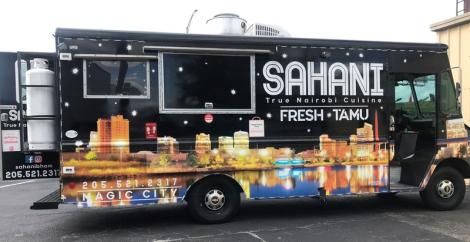 Kenyans have maintained their prominence in the world, particularly in the area of entrepreneurship that is inspired by the food and customs of their native African community.

David Kimani and Collins Ngure, two brothers who specialize in selling food with a Kenyan influence, have recently had success operating food trucks across Birmingham, Alabama, in the United States.

The truck with the name Sahani (Swahili meaning plate) was introduced in 2020 and specializes in dishes like Nyama Choma and Matumbo (tripe), all of which cost Ksh2,400 per plate when served with an accompaniment.

Other meals on the menu include Mutura and Mokimo, as well as Chapati (which costs 300 Ksh per piece) and Sausage.
The two said that after starting the company, Matumbo and Nyama Choma had begun to attract attention. “(Matumbo) is so rich and flavorful, really good. When people first hear tripe, they’re like, ‘ugh.’ We give them samples—‘Here, try this.’ And they say, ‘Yeah, let me get that,” revealed Kimani in a past interview.

Kimani, who was born in Nairobi, his brother, and their family emigrated to the US in 2002 in quest of a better life.

Ngure loved to cook, so the two of them saved up money to buy the truck and bring the food from Kenya to Alabama.

They had originally intended to start a modest kitchen, but the epidemic forced them to purchase the mobile truck for simpler delivery.

READ ALSO  Mejja:I was depressed when my wife left

“Taking a deep into the Kenyan culture. I feel like a lot of people don’t travel the world, but you can get a taste of Kenya right here in Birmingham,” added Kimani.

Barrack Obama beats Lupita Nyong’o for Emmy Award in US

Kenya in tense wait for Supreme Court ruling on election