Meet the teacher who volunteered to control traffic after losing job 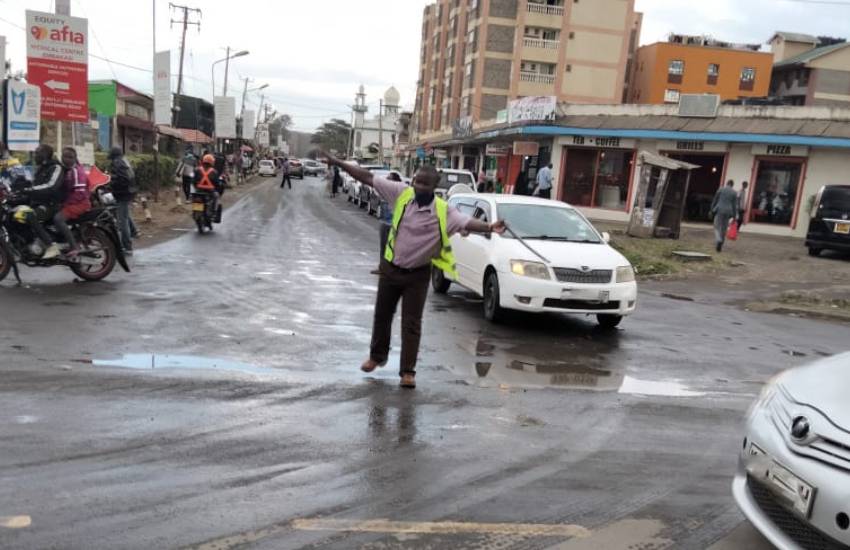 The Covid-19 pandemic has affected almost all sectors of the Kenyan economy including education with private teachers being on the receiving end.

Before the government announced drastic measures in March 2020 to contain the spread of coronavirus, Tom Owino, was busy teaching in a private school in Embakasi East, Nairobi County hoping that one day he will be employed by the Teachers Service Commission (TSC).

Little did the 38-year-old primary school teacher know that his hopes will be cut short when the government closed all learning institutions in a bid to curb the spread of Covid-19.

Weeks after he was rendered jobless, Owino crafted a plan on how to survive and fend for his family by volunteering as a civilian traffic controller.

“I thought of doing a myriad of things to help my family but I did not settle on one at first because I was undecided. I was just strolling one evening along Fedha Road, opposite KAG Church when I realized that the jam along that route was being caused by people trying to cross from the nearby supermarket and those using Outer Ring Road and Tel Aviv,’’ said Owino.

The next evening, Owino, who graduated from Shanzu Teachers Training College, Mombasa, made up his mind to fully venture into the fearful zone where only the police dare.

Dressed casually, Owino stepped out and started controlling traffic at the junction located at Fedha Road and Tel Aviv.

“I was a bit worried but I had resolved to try my luck come what may,” he added with a broad smile.

After a short while, some drivers noticed his efforts and told him to stand at the center of the road and command with authority just like traffic police officers do, a move that boosted his courage. Within a short time, the traffic started to move.

Speaking to Standard Digital, Owino said he got motivated fourth fold and was at work very early the following evening.

Proud of his efforts, matatu drivers and private vehicle owners gifted him several reflector jackets, gumboots, and a club.

“I had worked for some days without being given anything but I was just happy that the jam was moving with people not being delayed on the road but soon after people started giving me tips as tokens of appreciation for a job well done,’’ he noted

Owino who is believed by many as civilian police and from Nyanza, says controlling traffic has been fun for him as he derives happiness seeing people arriving home on time after tedious duties.

We caught up with him during one of his evening activities and true to his words, he has earned himself so much respect from the public and even the police commend him for the good effort.

“The police here recognize my work and are in full support of me, in fact, they say I have lessened their work,’’ he says.

Just like any other job, controlling traffic has its many challenges but the biggest of all is when It rains and traffic is heavy and he is alone and every drive requires his attention.

Asked if he will return to his calling as a teacher, he said he will continue controlling traffic for now as he waits to see if he will be employed by TSC.

“I am a trained teacher and this is my calling to impart knowledge to the children, I will never leave my job for anything, I am just buying time here waiting for the state to employ me,’’ affirmed Owino.

Owino noted that fellow teachers are amazed by his zeal, and called upon the youth not to be choosy when it comes to jobs. “It is high time for youth to shun waiting from white-collar jobs and grab any job that comes their way and becomes the dependant,’’ Owino advised.

Related Topics:NewsTom Owino
Up Next

Covid-19: I am now vaccinated, what next?