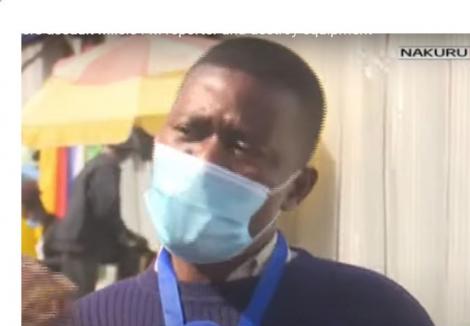 Speaking to a local media station, David Omurunga revealed that he was stopped by plain clothes officers outside his workplace in Nakuru County.

He added that his attempt to identify himself as a journalist fell on deaf ears.

“I was leaving the office at around 8:10 p.m. but four men attacked me suddenly. I thought they were thugs. They reaped my sweater. I had carried my equipment in a bag and I cannot find my recorder. It is lost,” said David.

“My knee is also hurting. My national ID card is also lost and I am wondering how being a journalist is equated to being a criminal.”

David narrated that after being assaulted by the officers, he was bundled into a Landcruiser.

He was taken to the police station but he was released before being booked into a cell.

“I called Madam OCPD Elena Kabukuru while in the Landcruiser who directed me to OCS Derrick Nyaga. I called him but we did not agree

“When we got to the station, we were bundled into the cell but before I could get in, a police officer came asking for the journalist from the crowd,” he added.

He further disclosed that brutality cases against journalists in 2021 had exceeded 40.

“What we have got to do now is ideally identify the individual police officers and hold them responsible which is why we are going to demand the Inspector General of Police have the (culprits) identified and taken to Independent Police Oversight Authority (IPOA),” stated Omwoyo.