Miraa: How the green gold of Meru became Nairobi’s pastime 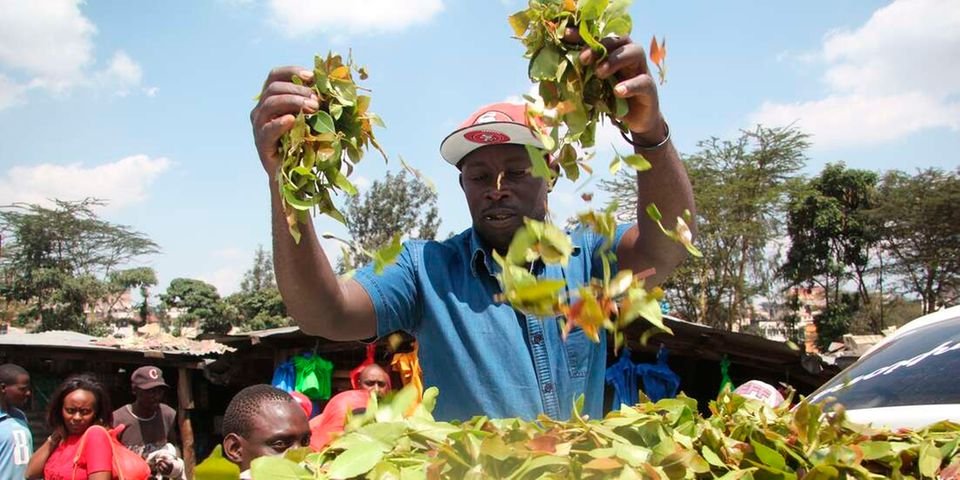 On July 10 last year, we woke up to the surprising news that it would be an offence for police officers working in President Uhuru Kenyatta’s security detail to chew muguka or miraa.

Those working or residing within State House or any of the presidential escort camps will also face disciplinary action should they be found chewing the stimulant.

The order was extended to include officers serving retired President Mwai Kibaki.

The presidential escort commander Josephat Kirimi said miraa posed a health risk to the officers and their families. He also evoked the tired phrase of tackling the spread of Covid-19.

What is clear about the order is that miraa had found its way to State House. This wasn’t the first time the twig was being demonised by officialdom and we are sure it won’t be the last.

Chewing of miraa and muguka has already been entrenched as a Kenyan cultural pastime. For more than a century, miraa consumption has been growing steadily and is being appreciated by Kenyans of all socio-economic rungs.

Gone are the days when the twigs were associated with young, sheng-speaking, bhang-smoking, functional alcoholics with unkempt hair and sagging trousers seated in rat-infested back streets.

These are places where tall tales and yarns are spun, imaginations are allowed to run wild and fantasy properties are acquired and abandoned at will – just people who have lost their way in life and have given up the urge to take a detour back to the right path, common report imagined them with red eyes and greening at the ends of their lips.

The prejudices that were heaped on miraa are radically wearing off and those that partook it in hiding are now coming out in the open and bonding with each other while chewing the twigs.

When art takes up to lauding something, one better take heed. In his song Hapo Tu, rapper Nyashinski talks about city life and how chewing miraa was a favourite pastime for Nairobians.

In Coast, for instance, this phenomenon evolved a long time ago and ‘gardens’ and ‘maskans’ were created where friends would while away weekend afternoons chewing miraa and making small-talk. Sometimes they would be watching football.

Things are totally different today as miraa has gone uptown. And it’s not just urban men partaking of the stimulant as some middle-class women also want a piece of the green pie.

In a recent tell-all session on her Instagram page, a popular social media influencer admitted to being a miraa fanatic. “Yes, I chew miraa but napenda muguka (I like muguka),” she said.

A PR practitioner said she has even learnt to differentiate types of the stimulant. “I started chewing miraa due to peer pressure. I always thought it was dirty but my male friends urged me to try it and I have never looked back,” she said.

“I usually buy it on Fridays. The package is delivered to my office, neatly packed you could mistake it for a limited-edition cologne.”

There is also an economic factor to it.

“We used to spend between Sh20, 000 and Sh30, 000 on alcohol on a weekend. But when clubs were shut down due to Covid-19, most people moved from alcohol to miraa,” says Emmanuel Aseko, a car dealer in Nairobi.

Its addictive nature has roped in a huge number of consumers. “Chewing miraa is fun, not like alcohol that renders a person completely useless after a few bottles. With miraa, you stay alert always,” says Aseko.

It has become so popular that consumers no longer need to walk around looking for a shop with a ‘banana leaf’ to buy it. It’s all over the place.

James Gitonga, for instance, sells miraa online and has business pages on Facebook and other digital platforms. “Business is good in Nairobi. By 11am, I am usually done for the day. In 2017, miraa was only popular in certain estates,” says Gitonga.

He was introduced to the business in 2015 as a shop assistant in Ngara market. After seeing how profitable the business was, he opened his shop.

Most of his customers were from Ngara, Eastleigh and Pumwani. Then the orders began. He opened other shops in Racecourse along Ngong Road and Karen.

He attributes the phenomenal growth of the trade to the diplomatic row between Nairobi and Mogadishu. When Somalia banned Kenyan miraa in 2019, prices fell sharply as all the stock had to be consumed locally.

“Miraa became cheaper and so a lot of young men went for this alternative as they find it better than alcohol. It’s no longer a poor man’s pastime. People driving SUVs usually come to my shop at Ngara,” offers Gitonga.

Over the past few years, more people have embraced muguka because it’s way cheaper. For as little as Sh50, you are good to go.

“Muguka sells fast because no matter how broke you are, you will always find a way to get at least Sh50 for a packet. It’s as addictive as miraa. With miraa, you have to part with Sh500 and above, depending on the quality,” says Gitonga.

Some club managers in Nairobi allow miraa in their establishments, unfathomable just a few years ago.

Emmanuel Nzioka runs a general shop in Kayole that is doing well because of the miraa wing of the business. “I integrated the miraa business three years ago and it is the one sustaining the shop. Selling bread and milk wasn’t profitable,” says Nzioka.

According to the National Authority for the Campaign Against Drug Abuse (Nacada), more than a million Kenyans aged 15-65 years chew miraa. The 2017 survey showed that 836,872 consumers had medical disorders.