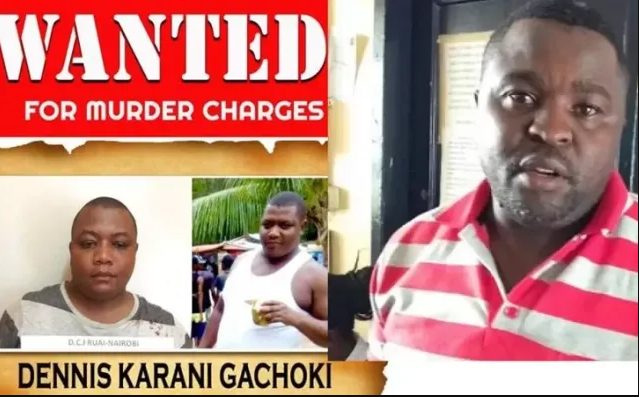 The key suspect in the broad daylight shooting of Samuel Mugoh Muvota in Nairobi’s Kasarani district has been identified by the Directorate of Criminal Investigations (DCI).

As per a DCI release dated Friday, May 20, the suspect, Mr Denis Karani Gachoki, is suspected of being the perpetrator of the horrific murder captured on CCTV.

The sought perpetrator is also in possession of a weapon that was stolen from a befuddled police officer in Mombasa in November 2020, according to the report.

“Efforts by detectives to arrest him have been futile since the thug, who is well loaded, influences rogue cops who tip him off once an operation for his arrest has been launched,” the DCI stated.

The DCI also claimed that Karani shot Muvota, his purported boss, after a quarrel over the distribution of revenues from their drink-spiking business.

“This, among other beef, are suspected to have led to a bitter fallout leading to Monday’s daylight murder of Samuel Mugoh Muvota, who has left behind seven grieving widows and many children,” DCI added.

According to additional information obtained by Forensic Cyber detectives, Karani’s last signal was caught up deep inside Burnt woodland, hours after the crime.

“We believe that the suspect has already crossed the border to a neighbouring country,” noted DCI.

However, authorities have asked members of the public to call the toll-free number 0800 722 203 if they have any information that could lead to his apprehension.

The suspect’s identity was disclosed just hours after the DCI revealed Mutova’s dark past, which included multi-million dollar thefts aimed at revellers.