The Directorate of Criminal Investigation’s (DCI) Corporate Communications and Public Affairs Unit has uncovered fresh information about Muvota’s purported area of work, which may have contributed to his early death.

Muvota had been detained more than 30 times in the previous 11 years on fraud-related crimes, according to DCI.

DCI further states that, Muvota was the mastermind behind SIM switching operation running in Nairobi and its environs, which was making millions off unsuspecting Kenyans.

Muvota is accused of duping naïve Kenyans by scouting and recruiting over 50 women to spike the beverages of unsuspecting diners at high-end entertainment venues throughout the city.

The females would poison the victims with a substance known only as ‘Tamuu,’ then steal all of their things, including ATM cards, which Muvota would later use to illegally withdraw money from their mobile money and bank accounts.

Since his entry into the syndicate in 2011, Muvota has reportedly acquired many multi-million shilling residences across Nairobi, as well as a fleet of high-end cars.

During that time, Muvota married seven women, according to the DCI, all of whom claimed not to be aware of his activities when questioned by detectives.

“Muvota began his trade in 2011 by hanging around city ATM’s and offering to assist customers who had difficulties withdrawing money from their accounts. Working with crooked banking officials who would jam the teller machines once a client inserted his ATM card, Muvota would approach the client offering to assist,” the DCI said in a statement.

“He would insert the clients’ card then pretend to be facing away and ask the client to key in his password and first confirm the balance before withdrawing the amount they wished. However, since the machines eject the ATM card first, he would get hold of the card as the unsuspecting client waited for the cash.”

Muvota would then skillfully switch the ATM cards for counterfeit ones before returning them to his victims. He’d then nonchalantly walk around the city, hitting several ATMs to empty the funds kept in the accounts.

According to investigators, he preferred Co-operative bank ATMs, where he would calmly wait for his next score. 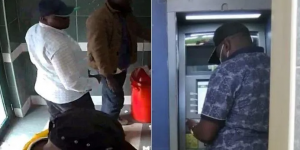 “He would strike past 5 in the evening when he was sure that account holders would not walk back to their banks to inquire what was happening to their accounts, since messages of withdrawals they had not made would keep streaming into their phones,” said the DCI.

“The hotlines operated by banks wouldn’t be of any help to the helpless clients, as alerts of unsanctioned transactions kept coming all night. By the time the victims visited their banks to make inquiries into the fraudulent transactions, they would be met with apologies from equally hapless tellers.”

Muvote allegedly caused the death of a woman in Kayole in 2018 after utilizing her customary Pesalink technique to empty her life savings from her account.

Muvote reportedly transferred Ksh.700,000 from the lady’s account to his own, leaving only Ksh.700. The woman allegedly fell and died after learning she had been deceived.

According to the DCI, cyber security experts were familiar with Muvote because of the amount of times he was linked to breaches in victims’ accounts.

He was also said to have ties to a number of police officers, who would occasionally alert him when he was being chased by authorities so he might avoid arrest.

“After 11 years in the highly dangerous trade that has in recent days targeted patrons looking for entertainment in high-end establishments including top public servants, businessmen, politicians and men of the cloth, Muvota seemed to have made more enemies than friends. Detectives suspect that one of the women he had employed or an accomplice must have given him in to criminals after a deal gone sour,” said DCI.

An unknown gunman shot Muvote several times on Monday, shortly after dropping off a woman near Mirema Springs.

Money in various currencies, seven different national identity cards, six wallets, cellphones, and laptops suspected to have been stolen were among the items recovered from the slain man.

The car, which was peppered with bullets, was taken to the Kasarani Police Station. The vehicle is registered to a separate person who is assisting with the investigation.