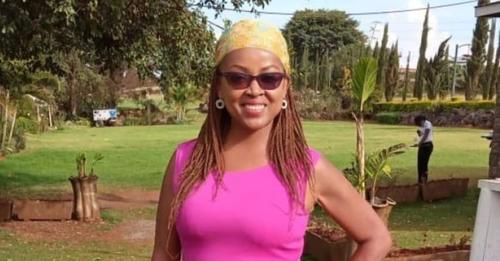 Former Tahidi High actor Angela Waruinge, popularly known as Miss Morgan has recounted cancelling her dowry ceremony for the sake of her peace of mind.

Waruinge, a mother of one and disclosed that some friends of her father had warned him about accepting her ex-lover’s dowry because his history with women was questionable.

Speaking on Tempire TV YouTube channel, the actress said she later came to find out that the allegations on him were true and so she decided to end the engagement.

“I was engaged and set to be married. He became a deadbeat baby daddy because I cancelled the engagement but there were elders who came to warn my dad against receiving the bride price.

They asked him not to accept the dowry because of his history with women; it was all true and I came to learn about it later,” she narrated.

According to Miss Morgan, her ex-fiance decided to become a deadbeat dad to their daughter because he insisted that she has to be in his house for him to take care of her.

“I told him though we cannot continue being together, he has access to our child but he said no,” she said.

Waruinge maintained that she opted out of the union due to her peace of mind because she valued being at peace than the allure of being married.

Not on social media

A few months ago, Waruinge explained she is not on social media because she dislikes the attention that comes with it.

According to her, celebrities often lack privacy thanks to the intrusiveness that comes with their career.

“You do not have privacy, once you are a famous person or a celebrity people will always find you,” Angela told YouTuber Obayi.

“I’m not on social media. I am just on Whatsapp because I do not like attention,” she added.