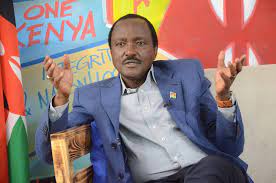 “Already Kalonzo is a political failure and his attempt to impose Sonko as governor is also bound to fail,” he pointed out.

He was speaking when he hosted UDA Muslim faithful during an iftar dinner organized by UDA party held at Jubilee hall in Mombasa county. The former senator blasted Kalonzo for undermining the county electorate through using Sonko to secure the governor seat during the polls. He urged the county electorate to stand up against Sonko’s gubernatorial bid arguing he poses a danger to the electorate.

“The  county residents are faced with a litmus test with the entry of Sonko into the gubernatorial race ahead of the polls,” he cautioned.

The UDA gubernatorial aspirant cautioned Sonko to stop imagining his corrupt wealth will make him the second governor of the county. Sarai urged the electorate to teach Kalonzo a lesson which he will never forget through rejecting Sonko during the polls. He argued Sonko was rejected by the city electorate and he wants to test the county electorate through the  gubernatorial race.

“Sonko should stop thinking his wealth will buy his way into the gubernatorial seat during the August polls,” he cautioned.