Gatundu South MP Moses Kuria, responds after being informed he is unwelcome in UDA 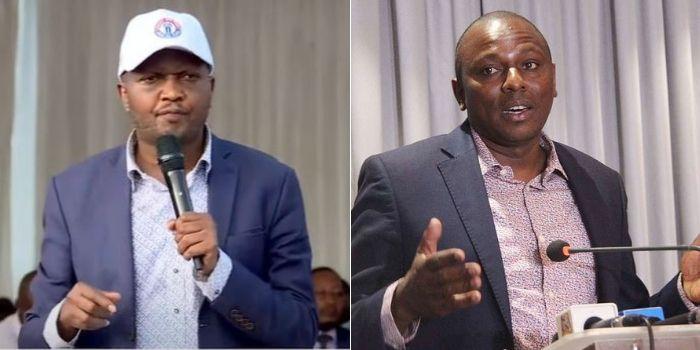 Gatundu South MP Moses Kuria, is not welcome in the United Democratic Alliance, which is led by Deputy President William Ruto, according to Kikuyu MP Kimani Ichung’wa.

The Kikuyu MP stated in an interview that the Chama Cha Kazi party leader’s presence in the UDA and the bigger Kenya Kwanza Alliance is aimed to sow confusion.

This follows Kuria’s revelation that he was in negotiations with the UDA and 19 other groups.

“I’m not aware of any such partnership (between Chama Cha Kazi and UDA). UDA is a party that welcomes everyone and if he intends to join UDA, he is welcome but not to create confusion to vend tickets. Our people are in UDA as their party of choice,” Ichungwa said.

He was surprised that his Kikuyu colleague seemed to be carrying a vendetta against him, and he dismissed Ichungwa’s statements as immature.

“I have read the unwarranted attacks on me by my colleague Kikuyu MP Kimani Ichungwa appearing in today’s Daily Nation with shock and dismay.

“Mr Ichungwa seems to have a lot of bile towards me for choosing to belong to the Chama Cha Kazi Party and not the UDA Party. This is my democratic right that will not be taken away by Ichungwa’s juvenile attack,” Kuria answered back.

After Kuria returned from Dubai in February, the love-hate relationship between the Chama Cha Kazi party head and members of DP Ruto’s team was revealed.

During his thanksgiving ceremony at Thika Stadium, he revealed that members of the UDA had been asked to evade the function.

“When I organized this event, I called Honourable Kabando Wa Kabando telling him that I wanted him to be a joint MC with my friend Ndindi Nyoro. But because there are certain quarters that believed that this event will be political, UDA officials convened a meeting and warned them from attending my event,” he said at the moment.

The Gatundu South MP was then officially asked to join the One Kenya Alliance, but he declined, claiming that he would only join if ODM leader Raila Odinga’s presidential campaign was dropped.