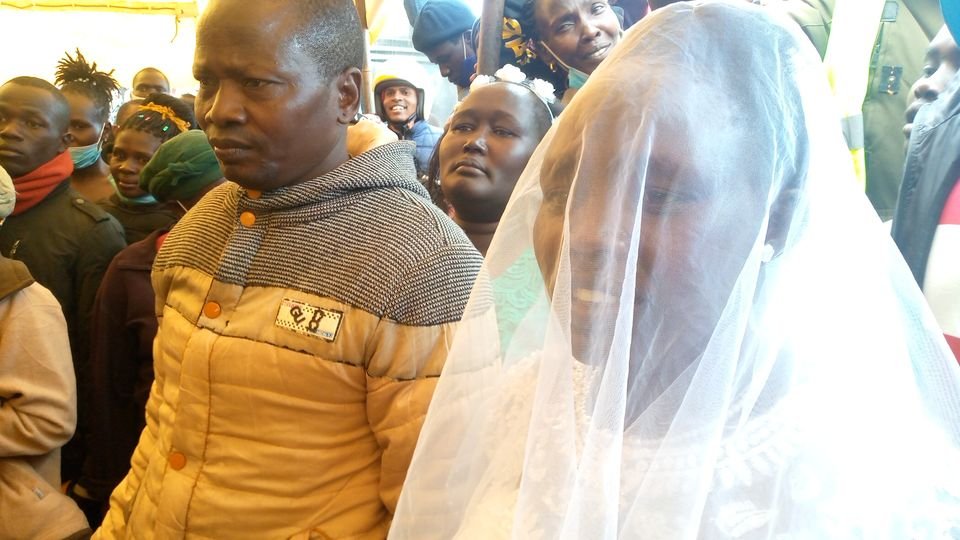 In a bizarre incident, a 41-year-old mother of six stunned her husband and villagers in Makutano town, West Pokot County, when she decided to “marry” the Holy Spirit.

Mrs Elizabeth Nalem, a town council officer, stunned her husband Joshua Nalem when she organised a brief ceremony at a local hotel in Makutano, where she was “bound in holy matrimony with the Holy Spirit”.

During the event, Mrs Nalem was escorted by workmates and businesswomen who cheered her up as she gave her promise and “hand in marriage to the Holy Spirit”.

According to Christianity, the Holy Spirit is the third “person” in the Holy Trinity of God. The others are God and Jesus Christ.

Dressed in a wedding gown and flanked by cheering women, bewildered villagers, an enthusiastic pastor, and a stunned husband, Mrs Nalem said “I do” to the Holy Spirit at Chelang’a Gardens, a hotel in Makutano.

To officiate the ceremony was Pastor Albert Rumaita of the Makutano Anglican Church of Kenya.“I have served the world for all my years, but now the Holy Spirit has directed me to serve the almighty God. The holy spirit drove me to Pastor Rumaita, who bought the wedding dress, organised this ceremony and even hired cars to escort me here,” Mrs Nalem said at the ceremony.

She said she had sought the consent of her husband with whom they have six children, but he declined.

“Exchanged” vows with another “person”

At the Tuesday evening ceremony, a stunned Mr Nalem watched in bewilderment as the love of his life “exchanged” vows with another “person”. The couple has been married for 20 years.

“I am perturbed. I paid 22 cows and 15 goats for my wife and right now she is having a wedding with the Holy Spirit. This is unbelievable,” said a shocked Mr Nalem.

He claimed that the wedding with the holy spirit was a culmination of the marriage troubles the two had been having.

“I have tried to change her mind but she insisted. I don’t know what to do,” said Mr Nalem.

The troubles, he said, increased when he challenged her about her new prayer habits.

“She would wake up at 3am to pray and when I asked her about it, she ran to a neighbouring homestead, leaving me alone,” lamented Mr Nalem.

Pastor Rumaita, who officiated the wedding he had planned and funded, said he made the decision because the world might just be coming to an end, and he figured granting Mrs Nalem her dream of marrying the Holy Spirit was a good deed.

Mrs Nalem, a member of the Full Gospel Church, said her request to be married to the Holy Spirit was turned down by her own church before she sought help from Pastor Rumaita.

“Because I am her neighbour, she came to me and explained herself, which is why I took the bold step and did what she requested me to do,” the pastor said.

The pastor said he bought the wedding gown for her together with a priesthood robe which she wore after the wedding.

Bewildered residents broke Covid-19 regulations of social distancing and wearing of masks to watch the event.