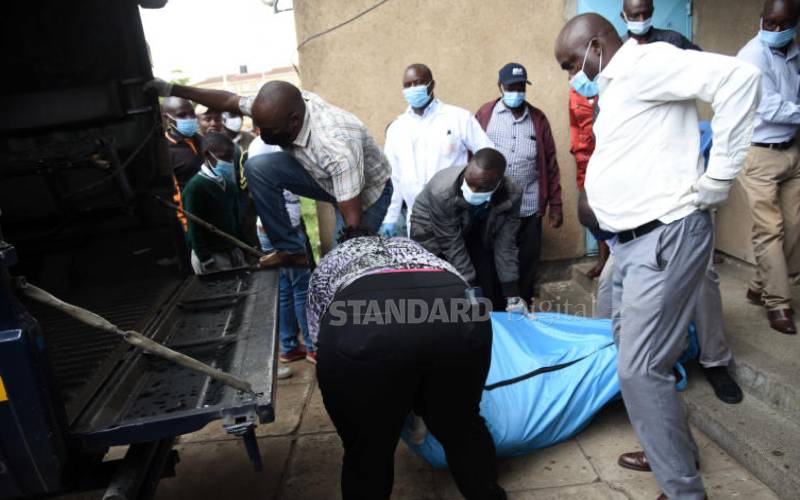 Police retrieved the bodies of a woman, identified as Charity Cheboi, her son and that of an identified man believed to be in an affair with Cheboi.

According to witnesses, Cheboi and her son were last seen on Sunday, while the male victim was seen on Monday.

The man’s body was found with the hands and legs bound with a laptop cable.

It is reported that the child’s biological father tumbled upon the bodies as he checked on his son after he was informed that he had not reported to school on Monday.

The father made calls to the child’s mother and after receiving no response decided to find out what the problem was.

According to his statement given to police, he was called by the school which was concerned by his continued absence.

Phone calls and knocks on the door went unanswered and when he made up his mind to look inside the house, his concern grew when he saw the sitting room was turned upside down.

Witnesses say they were hit with a stench after they forced their way into the house on the third floor.

Police said the woman was employed by the government and was stationed at the Registrar of Persons’ office in Mathare.

The woman and the child were found lying on the floor in their bedroom while the man was found bound in the bathroom.

The sitting area was in disarray and showed signs of a struggle.

However, the cause of death was not apparent as none of the bodies of the deceased bore any wounds.

Latest update regarding the passing of Mr Kimani Karangu of acworth, GA