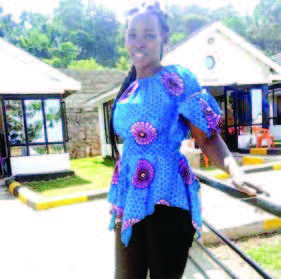 Tears flowed freely as a 36-year old mother who killed herself and her two sons on New Year were yesterday laid to rest at her home in Kakamega county.

Hundreds of mourners thronged the home of Helen Auma Buyanzi (pictured) at Lugari Station village in Lugari Constituency as they bade her and her children farewell.

The woman is said to have killed herself and her children after she discovered that her husband was having an affair with another woman.

Helen allegedly found the duo in the act at the woman’s rented house at Lugari Station market during which her husband assaulted her and dragged her back to their home and left.

She then called her three sons to their house, locked the doors and set it ablaze. Her first born son, Nathaniel Opendo, aged 11, however sensed danger, and managed to escape from the inferno.

His brothers, Chris Baraka, four, and Wisdom Osewe, one, were however unlucky and were burnt beyond recognition.

Helen was a hairdresser and operated a salon at Lugari where her husband, Thomas Amito, is also a popular businessman at the same market.

After more than 25 years, Natembeya resigns to focus on governor’s race