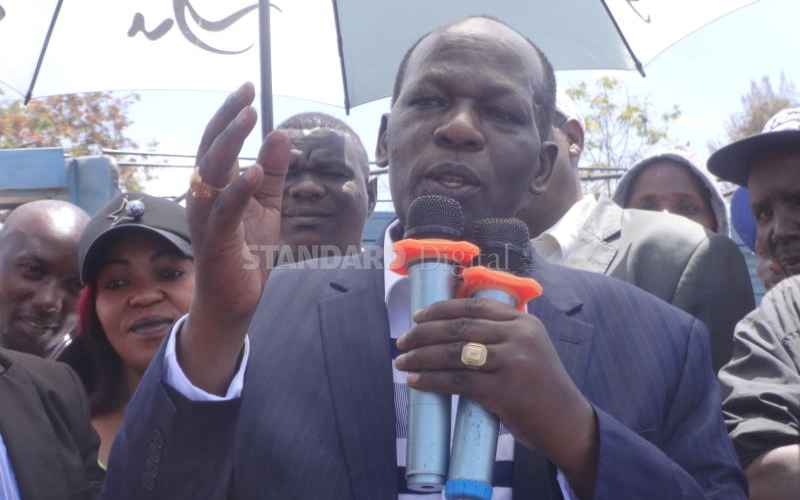 Popularly known as “Wakapee”, Waititu died on Monday evening at MP Shah Hospital in Nairobi while undergoing treatment. He had brain cancer.

The family of the MP, the sixth legislator to die in office, yesterday recounted their last moments with a man they described as humble, hardworking, and philanthropic.

Michael Munyua, the MP’s second-born son, said his father had prepared them emotionally when his health deteriorated in the last few days.

“I saw a very strong man when the diagnosis came. Doctors said he had a very short time to live because the tumour was aggressive,” he said.

The younger Munyua added: “He kept reminding us of what God had done for him, and that he was left with very little to do for both the family and the county.”

He said despite being sick, his father was active in positively influencing the lives of other people. He said his father sponsored a sports tournament in India where he was undergoing treatment.

“We celebrate his life as a family. It has been an interesting journey for all of us. He was a mentor to all of us,” said Munyua.

He went on: “I would ask him where he got all the energy when he was still ailing and he would say that when God says it’s your time, you will have to go. He had told us that when that time comes and we don’t see him, we should appreciate God’s will. That message has given us the courage to celebrate his life.”

The father of four was a second-term MP.

His daughter Terry described him as a fighter, saying her father only looked weak during his last days.

“Nothing would put him down but the last two days were tough for him and us all. We are letting him go in peace,” she said.

Waititu had to stay away from work on the advice of doctors.

“I walked with him in his medical and political journey and I must say he was a strong man,” said the MP’s last-born son, Martin.

Even as he fought the disease, Waititu’s wish was to participate in the construction of a cancer centre in Juja to ease the pain of Kenyans travelling abroad for cancer treatment. He would say that some families and caregivers who accompany their loved ones to India suffer to an extent of sleeping in the streets.

He believed a local cancer centre would facilitate early screening and treatment at significantly lower costs. The initial plan was to bring together the National Government, the Kiambu County Government, doctors from India, and local business people in the construction of the centre near Mang’u High School.

During his treatment journey, Waititu mentioned that a significant number of public figures were suffering from the disease and could not seek treatment in Kenya, partly because of the stigma associated with it.

He had said some  63 MPs (from the National Assembly and the Senate) and thousands of other Kenyans were suffering from cancer, with the treatment burden on their families’ shoulders.

Waititu had a tumor on the left temporal lobe of his brain, which became cancerous in February 2018.

Munyua worked closely with his father, being his Personal Assistant since 2015 and helping him run the constituency since 2017 when he became ill.

Yesterday, dozens of mourners trooped to the family’s home to condole with them even as leaders paid tribute to the MP.

The Head of State applauded the late legislator for his contribution and commitment to the fight against cancer in the country, saying the MP continuously raised public awareness on the disease.

“We’ve lost a very progressive, trusted and committed leader whose public actions always reflected the interests of his constituents. It is because of the trust and love that the people of Juja had for Hon Waititu that they entrusted him with a second term in a very competitive election despite his illness,” the president said.

Deputy President William Ruto said Waititu was a principled, hardworking and respected leader who was above party politics.

“He was selfless, bold and gifted with an affable personality. We will miss his servant leadership that transformed many lives,” said Ruto.

National Assembly Speaker Justin Muturi and Senate Speaker Ken Lusaka regretted that cancer had yet again claimed the life of a colleague and called on the government to prioritise healthcare.

The two speakers recounted how Waititu battled the disease with courage and was a source of inspiration to many, as they faulted the broken healthcare system that has seen thousands of Kenyans seek treatment abroad.

“The late Waititu had immense interest in agriculture and real estate. This nation has lost a progressive, trusted and devoted community leader whose actions reflected the interests of his constituents,” said Muturi.

He said Waititu served diligently in various House committees and was vocal on matters pertaining to coffee as exemplified by his efforts that contributed to the declaration of the coffee cherry advance revolving fund by President Kenyatta during his 124th Session of the International Coffee Council in Nairobi in 2019.

“He will be remembered for his legislative role and in the introduction of the laws of Contract (Amendment) Bill, which was the first private member’s Bill in the 12th Parliament and sought to compel creditors to first realise the assets of the principal borrowers before proceeding to realise those of guarantors in cases of default by principal borrowers of loans,” said Muturi.

Lusaka led senators in mourning the MP, whom he said consistently supported legislation geared towards improvement of the agricultural sector and ease of doing business in Kenya.

National Assembly Majority Leader Amos Kimunya said Waititu openly talked about his condition, but believed he would one day heal.

“He kept telling us, ‘I have cancer, but I believe it will go away,’” said Kimunya. “He never lost hope. He knew he had a terminal illness but he believed he would heal.”

National Assembly Minority Leader John Mbadi said the Juja MP was one of those Kenyans praying that this country could come together and unite and that there would be peace.

“We need to look at the health sector in this country and address this issue of cancer. It has ceased to be a rich man’s disease,” said Mbadi.

The Suba South MP added: “Waititu was a person of average means but I will tell you, the number of poor Kenyans who are suffering and dying from this disease cannot be counted.”

“Cancer has spread throughout this country to almost every village. I challenge our committee on health that this House should actually take the lead in dealing with this scourge,” said the West Pokot MP.

Nyeri Senator Ephraim Maina eulogised Waititu as easy and kind, a gentleman who was humorous and a man of the people.