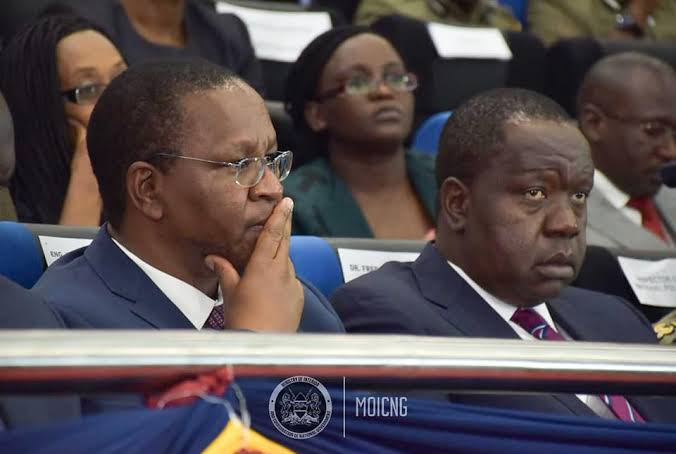 The two had scheduled a meeting with MPs serving in the National Assembly’s security committee on Friday morning, April 2.

PS Kibicho expressed his disappointment after the MPs snubbed the meeting despite all the efforts made.

“We are disappointed that despite all the effort, the notice that had been given and us responding even if the seven days were not provided, the team would not form a quorum and the meeting had to be called off,” said Kibicho.

The PS noted that the meeting was the 50th meeting to be held this year.

“We have a very elaborate system of answering parliamentary questions, had prepared and were ready. We hope that they will organize themselves better next time so that we are able to satisfy members of parliament who are asking very important questions on behalf of citizens.

“We are more than ready to respond to the honorable member’s questions and concerns as soon as they invite us again,” he remarked.

CS Matiang’i and PS Kibicho had appeared before the committee to address questions and concerns on security.

This is the second time the meeting is called off, about a week ago, Matiang’i appeared on March 24 before the committee accompanied by other security officials but had to leave after waiting for more than 30 minutes for some members of the committee to arrive

The legislators claimed that they had skipped the meeting to teach CS Matiang’i a lesson.

Meet the teacher who volunteered to control traffic after losing job