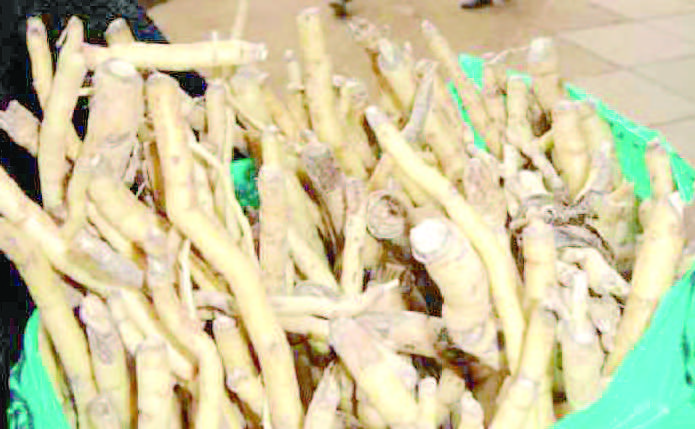 A recent multi-million shilling export deal between mukombelo farmers from Kakamega county and a French firm now hang in a balance.

This is after the root, also known as mukombera, which was to be exported became scarce at the local market.

Its price has also shot up as only a handful of farmers can manage to source it.

The deal was expected to see a local conservation group; Kanfcco exports over 100,000 metric tons of the precious root every year beginning 2022. The deal was signed between Kafcco and Mansfield, a French multinational.

“Since our farmers signed the deal a few weeks ago, there has been a major drop in the supply of mukombelo at the local market. This is unfortunate,” said Caleb Makatiani, a resident of Shinyalu; which is the bed rock of the root.

“Mukombelo is our heritage and we cannot be starved, just because of a deal with a foreign country,” said Sospeter Kulecho; a resident.

They accused the farmers of hoarding the crop so as to raise enough for the export market.

But farmers who entered the deal dismissed the claims, saying they would ensure they raise enough for the export market and maintain supply to their local customers.

“It is true that we are still short of raising the 100,000 metric tons that we should start supplying from next year, but I am not aware of any farmer who has hiked the root’s price or hoarding it,” said Daniel Muchesia, a senior official at Kafcco.

The root, found mainly in Shinyalu and Ikolomani, is very popular among the Kakamega residents, especially the male-folk, as it is believed to boost libido, appetite and cleanse the blood.

READ ALSO  A highway thief and a telephone call that cut short a man’s life
Related Topics:News
Up Next

Four arrested over murder of medic