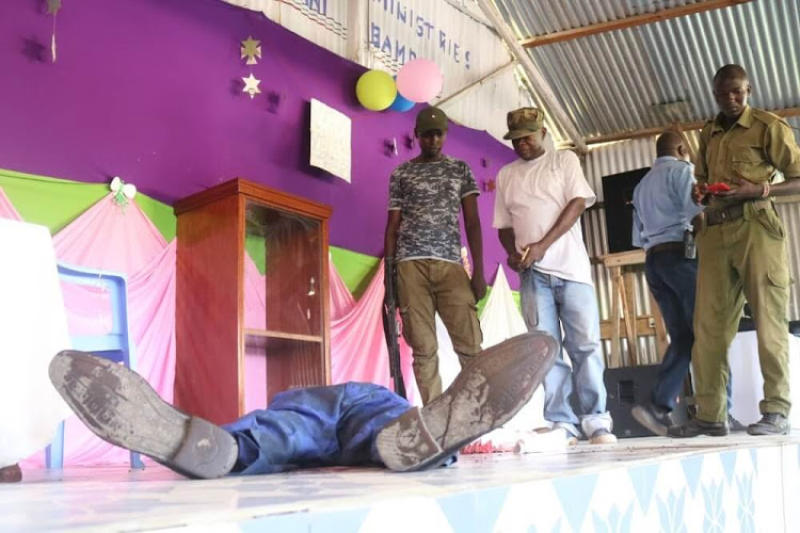 When a middle-aged man was found dead alongside a woman and her child in Government Quarters on Jogoo Road, Nairobi, last week, few would have imagined that he was a thriving seminarian about to graduate to set about a lifelong Catholic church missionary work.

To the residents of ‘Gava’, as the estate is popularly known, Kelvin Kipkoech passed for a cousin who frequently visited his relatives every other weekend, possibly on break from  college or work.

But when truth came out, not even his father Elijah Kimaiyo could come to terms with the circumstances in which he died. Kipkoech was studying at the St Thomas Aquinas Seminary in Nairobi and was expected to go back after finishing his eighth-year examinations.

And as police try to unravel how Kipkoech, Charity Cherop, 34, and her son Allan Kipng’etich died, the incident adds to a growing list of men of the cloth who have been killed or hurt in circumstances that have left the faithful baffled.?

On the night of March 21, 2010, it was raining heavily in Makueni. And as it was the norm in most parts of the country, heavy downpour was synonymous with blackout. But it was an act of man at the Makueni Catholic Mission House on that night that was to dominate conversation for the months that followed.

It started with a reunion of a few good men of God and ended in an attempted murder conviction for a fast-rising priest from Machakos.

Father Fidelis Nzuki Mutuota, an assistant priest at the Makueni Catholic Parish, arrived from Nairobi for a catch-up with four friends, including the parish’s priest Father John Wambua Makewa. The five men enjoyed a meal and retired to their beds.

Later, Nzuki was woken up by a loud sound he believed to be a gunshot at about 4.15am. Court records say the priest called out a colleague, Father Boniface Kioko, to confirm whether he had heard right. The two men, huddled against the wall, remained still.

Ten minutes later, Makewa entered their room, shotgun in hand.  It was a Brno Special Poldi Elettro, double barrel. He informed them that there were thieves outside. They followed him to his bedroom, where he handed Nzuki three bullets, which he was to give him on demand. That was not all. Makewa also gave Nzuki a pistol.

In the darkness, Makewa groped his way to the bedroom window, loaded his shotgun, cocked it and fired twice towards the sisters’ residents. Three sisters lived there. They were yet to see intruders, but Makewa claimed they had moved into the sitting room.

Nzuki obliged, but as soon as he reached for the door handle, he heard a bang and felt a sharp pain on his left upper arm.

But Makewa, a licensed gun holder, insisted that his assistant had been shot by the thieves. Then, according to court records, he shot Nzuki on the thigh.

In panic, the sisters called Makewa to find out what was happening. Kamene dialed his number. “He said that there were thugs but everything was under control,” court records read. But before Kamene hang up, she heard three more gunshots.

50 metres away, Makewa was telling a different story. He told seminarian Boniface Mutua that the sisters had called to say “that the thieves had gone into their side and were firing from there.”

The sisters fled their room and made their way to the chapel for prayers. As they sought divine intervention, Father Michael Mutuku, who by this time had made his way to the injured priest did not like what he saw. He knelt down beside the bleeding Nzuki and took his confession.

When the case came up before Makueni Senior Resident Magistrate Richard Koech, Makewa, denied shooting Nzuki. “I never attempted to shoot Fr Nzuki. I was not mad to have thought of shooting him. I did not use the 50 bullets in my possession at the time of the alleged shooting,” he claimed.

He spoke of how Nzuki, Mutuku, Mutua and Father Boniface Kioko and himself had exchanged pleasantries before they retired to bed following a blackout shortly after midnight.

He later heard gunshots, rushed to wake up his visitors and noticed Nzuki had been shot.

Four years later, though, there was more than an attempt at a priest’s life. Just a month and a half after he had met Pope Benedict the XVI, the Vatican announced that Bishop Luigi Locati, the Apostolic Vicar of Isiolo, was shot dead as he returned home from a parish centre.

He had just had his supper when, as he walked home, he was accosted by a group of men who shot him in the head and neck. He died an hour later at a nearby hospital. A year earlier, he had escaped a homemade bomb attack.

The then President Mwai Kibaki called the assassination “a repugnant act, a great loss, not only for Catholics” before attending his funeral service attended by thousands. At the time, the common thread was that the bishop was a victim of inter-communities clashes that had claimed dozens of lives already.

But later, investigation would point, first, to a likely motive – money. And then to an unlikely source – Father Waqo Guyo.

After an eight-year trial, a judge named Guyo as the mastermind of Locati’s death. “The priest planned, financed, facilitated the acquisition of the gun and recruited the co-accused persons to execute the plan to kill the bishop,” Justice Fred Ochieng’ ruled.

Guyo had told the gun owner that it was for hunting. It instead cut short the life of the soon to retire catholic priest.

Guyo and four other men were found guilty of the murder of the 77-year-old bishop and sentenced to hang.

The motive was simple. Guyo wanted Locati out of the way so that he could have direct control of the parish funds. “The defence has proved beyond any reasonable doubt that the accused murdered the bishop. It was inhuman for the accused to kill an elderly and harmless man of the cloth in such a brutal manner,” said the court.

The judge noted that Guyo’s mother died after learning that her son had been found guilty, expressed his sympathy, but maintained that he must pay for his sin.

On January 6 last year, members of the Grounds for God’s Gospel Ministries, popularly known as 3G, were treated to a disturbing first service. Eyewitnesses say that all was going well and the pastor, Elisha Misiko, invited the congregants to a time of prayer.

Then, as was customary in the church, Misiko got up and walked towards his wife of 20 years, who was a cofounder of the church. The pastor stabbed Ann several times with one of the two knives hidden in an envelope. Before a shocked audience, he then stabbed himself three times in the stomach, placed the blade on his neck and in one move slit his throat.

The two were bleeding to death at the altar they had spent two decades to build.

The signs had been there. In 2017, Misiko was detained by police in Mombasa after his wife filed a complaint alleging that he wanted to kill her. Misiko, an assistant pastor then, was released the following day and the couple that had four children lived separate lives ever since. The two then got embroiled over the ownership of the church.

In a 17-page suicide note titled ‘betrayal and consequences’, Misiko alleged that his estranged wife had changed the ownership of the church to her name, stolen their land and their children. The note also talked of the couple’s formative years. “When we got married, life was hard. I was forced to do the mkokoteni business. I took a loan from SMEP and combined