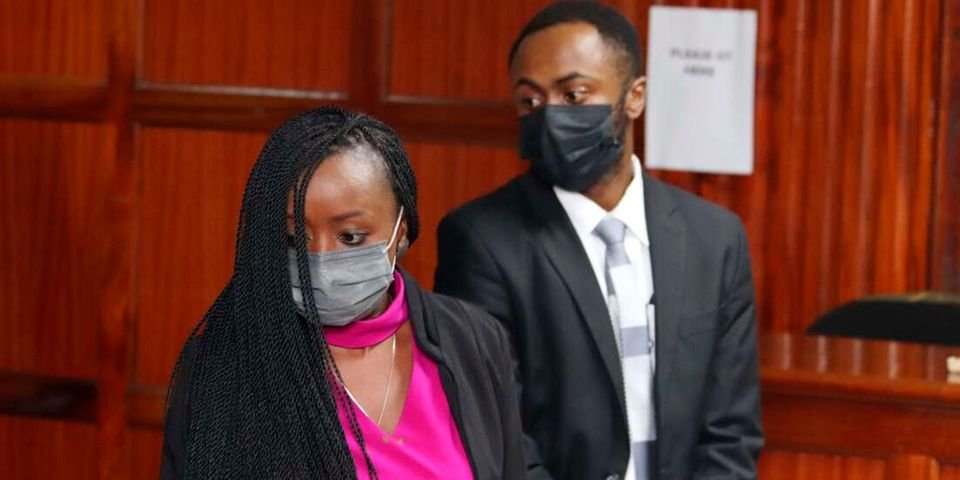 The court was told that Mr Irungu burnt some items outside the house he shared with former TV anchor Jacqueline Maribe at Royal Gardens Park in Lang’ata.

Mr Brian Kasaine, the witness, said he was woken up by a WhatsApp call from Mr Irungu at 2am on September 20, 2018.

He said Mr Irungu, who was his neighbour, asked if he (Kasaine)  had “something like paraffin or a can of air freshener … something flammable”.

“I told him I did not keep such things in my house. I asked what he wanted to do with paraffin and if he had a stove but he said he wanted to burn some stuff,” Mr Kasaine said.

“Irungu said he had found paraffin and burnt something. He pointed to a spot in the compound.”

The two are charged with killing businesswoman Monicah Kimani on September 19, 2018.

The prosecution says the pair committed the offence with other people still at large.

The court was told that 28 bullets with no serial numbers were found at the couple’s house.

The prosecution said a firearm was found in a pool of blood in the house on the night of September 20, 2018, after Mr Irungu shot himself in the chest.

Mr Kasaine, a licensed gun holder, said he had given Mr Irungu his pistol for practice.

READ ALSO  BRAVO! Larry Madowo promoted at CNN only 2 months after being hired

The witness said he knew Mr Irungu as an undercover officer and a private military contractor in the United Arab Emirates, who used to offer security to prominent people in Kenya.

Mr Kasaine told the court that when Mr Irungu shot himself, he went to the couple’s house and took the weapon, which he hid in the ceiling of his house before driving the injured neighbour to hospital.

However, upon leaving for the hospital, a house help named Pamella went to the bedroom and found a second gun in the blood.

“I cannot tell if my gun was used in the shooting. The bullets were different from mine and had no serial numbers or writings,” Mr Kasaine said as he was being cross-examined by defence lawyer Hassan Nando.

“I don’t know if they could have been fired from my firearm.”

Mr Kasaine added that at the time, the journalist and Mr Irungu were not on good terms.

He said she was evicting him from her house on that day.

“I found clothes scattered on the ground and Irungu was shouting at Maribe saying: ‘You want to throw me out of your house, it’s fine’,” the witness told the court.

The shooting took place a day after Ms Kimani’s killing.

How Murang’a jailbreak suspect drank his way back to captivity