Museveni's son Muhoozi to President Ruto: "If I made a mistake, forgive me." Muhoozi Kainerugaba who is Ugandan President Yoweri Museveni son , is once more in the news.

However, this time he is pleading for pardon rather than spitting anything offensive.

In a tweet on Thursday night, Muhoozi claimed he had no grudges against Kenyan President William Ruto.

However, he requested forgiveness from the next head of state should he have unintentionally trodden on anyone’s toes in any situation.

“I have never had any problem with Afande Ruto. If I made a mistake anywhere, I ask him to forgive me as his young brother. God bless East Africa,” he wrote, attached with two photos of the President. 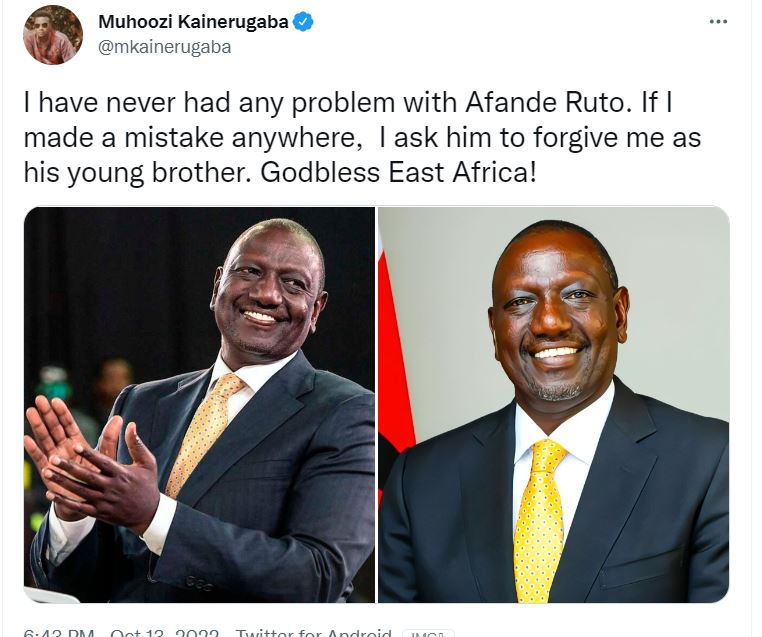 This comes a week after the Ugandan army tweeted about Uganda’s purported military strategy to “conquer Nairobi.”

Many Kenyans were offended by his comments, which sparked a Twitter spat between the two neighbors. As a result, Alfred Mutua, a candidate for the position of foreign affairs cabinet secretary in Kenya, met with Uganda High Commissioner to Kenya Amb. Dr. Hassan Galiwango to discuss the situation.

READ ALSO  Photos: Life and times of Tribeka boss who succumbed to Covid-19
Related Topics:Muhoozi KainerugabaNews
Up Next