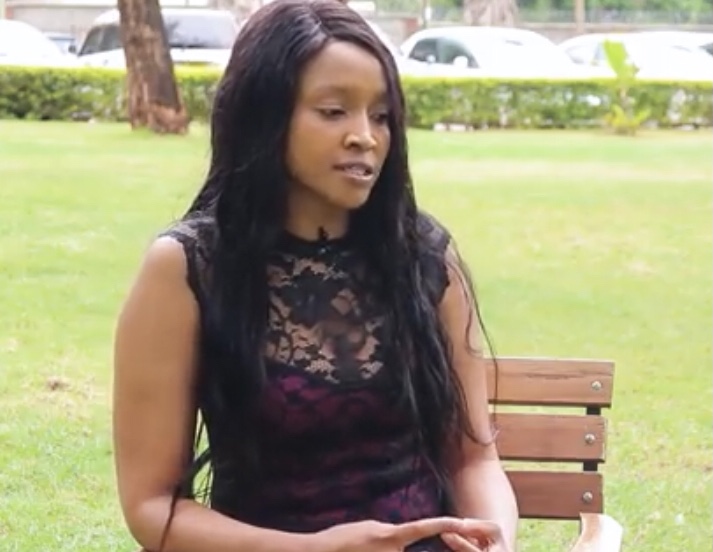 Like a  Hollywood cript, the story of Jane Mwangi, a Kenyan lady featured in a gripping online TV interview in Kenya has set the country’s social media on fire since last month

In an interview titled My Dark Life in Nigeria, which was broadcast as a two-part series by Tuko Talks, Ms Mwangi details her troubled upbringing, relationship with a Nigerian man in Kenya, and her journey to Lagos.

She says she was born into a broken home and “grew up in trauma,” then got pregnant at 17 and was in and out of toxic relationships, with kids. After a broken marriage to an Arab Muslim based in Kenya, she said she “was done being good” and hit the streets.

It was then that she met a Nigerian man who showered her with money and love—she experienced the stereotype in Kenya about Nigerian men and generosity in romance. The unnamed Nigerian proposed to her; they got married and started living together having fallen in love. But things went downhill from there. Watch as she speks to Tuko’s Lynn Ngugi:

“This relationship thing with Nigerians, Kenyan girls need to reevaluate it,” Jane declares, detailing the manipulation she says underlined her marriage. She says she was “not allowed to talk” besides occasionally speaking on phone with her man’s relatives in Nigeria. The couple also had a child together.

Jane claims her Nigerian husband was into fraud though he told her that he sold bitcoin. “At a point he was using my bank account. I used to collect money for him from Western Union. He was using me.”

She says Kenyan bank officials became suspicious and she was finally blacklisted from collecting money from Western Union, she notes in the long interview conducted in English and a local language.

“Kenyan girls fall prey always,” she avers, saying Nigerian fraudsters use Kenyan women to ply their trade and, if trouble starts, they run away leaving the woman to face the law. She states also that from giving her money, her estranged Nigerian husband started taking from her fashion business.

Conditions degenerated in their household as fraud money wasn’t coming anymore, Jane notes—and that caused the already limping marriage to collapse. On her own, she made a decision to visit Nigeria, leaving her kids with an aunt after selling some personal effects to raise money.

“One of the reasons was business…the other was to find out what was wrong with me,” the young woman tells her interviewer, referring to her plan to see Nigerian Pentecostal pastors whom she believed had powers, and to tap into the Nigerian clothing market. She would buy clothes and fashion accessories from Nigeria and return to her country in two weeks. She ended up spending two years in the underbelly of Lagos.

“They love foreigners,” she notes cheerfully of Nigerians. A lady she met at the hotel where she stayed in Lagos took her to the “big” Balogun market where she bought clothing items daily and stacked them in her lodge ahead of leaving. Days after shopping, she was directed to a shipping office in Balogun. She dropped her consignments there and paid to have them shipped to Kenya.

Except that the shipping office was fake. When she returned there to inquire why the goods had not reached Kenya, she was told there was no such office, she narrates. Heartbroken, she returned to the hotel only to have her phone, money and passport stolen presumably by her guide.

“Nigeria is not a normal place,” she declares.

Reporting at a Nigerian police station yielded nothing, she says. Though the hotel owner let her stay some extra days for free, she was essentially stranded with no money or passport, but with a resolve “not to return with nothing.” She therefore followed another lady she met at the hotel to some brothel in Lagos. Sex workers lived there and went out at night to hunt for money, according to her.

But the money she was hoping to make was not forthcoming, as her colleagues at the brothel would not take her to the parties and clubs where “rich” clients frequented: the owner of the brothel, a woman, told her it was because she was yet to be “protected.” That no one wanted to take her out when she had not done juju to insulate herself against work hazards, she recalls, laughing off the idea of using charms.

She later hit the streets anyway and met a lot of rich Nigerian men. “Nigerians are very rich, let nobody fool you,” Jane beams, recalling being exposed to luxury by clients whom she treated as dates. She remarks liking to have the men “take me out for dinner, like a relationship,” as that was the only way to feel dignified doing what she had to do to survive.

She made some money, but “something always happened” each time she was on the verge of raising just enough to return home.

But one episode with a rich Nigerian man who took her out on dinner dates twice, finally confirmed what her colleagues at the brothel had been saying, the story goes.

After the getting along and finally having sex, she had “sleep paralysis” for days with intense, inexplicable vaginal bleeding. “There was blood everywhere”—for days, she recalls, mentioning how the brothel owner said she had been used for money rituals.

Diana Marua, the wife to singer Bahati, has refuted claims that she stole designer bags from businesswoman Jane Mwangi.

In a charged statement, backed up by screenshots that she said are of their alleged engagement, Marua tore into the accusations and claimed that the businesswoman abused her trust.

According to Marua, Mwangi reached out to her via WhatsApp from Nigeria, desperate and in need of a ticket back home.

“One day scrolling on my WhatsApp messages I get disturbing messages from a lady introducing herself as Jane Mwangi, texting from Nigeria trying to open up to me that her life is at the edge. Sending me photos of her devastated self, telling me that her family views her as an outcast and she’s at the verge of committing suicide,” stated Marua.

Hinging her plea on Marua’s faith and the fact that they at one time schooled together, the mother of two narrated that she agreed to aid the stranded acquaintance.

“My interest to help her began when she tried to remind me that we went to the same school. As a christian, I knew prayers alone were not enough and I promised her I would do anything to make sure I pay her flight back home,” she narrated.

When Mwangi flew to Nairobi, Marua invited her home but shifted base to Two River’s Mall where their meetup was, however, not fruitful and was forced to postpone.

It was when they went back to Marua’s residence that, she says, she discovered that Mwangi had earlier showed up with a suitcase.

“We got home and I organized a cab and to my surprise, this lady had come with a suitcase (I hadn’t seen it, nanny opened for her) ata nilidhania ameamua Kuhamia Kwangu. Haiya! And instead of going with her suitcase, she leaves it,” added Marua.

Mwangi, according to Marua, promised to collect it in a day’s time, but never did.

“The last conversation was please pay for my Uber and I asked her kama alifika she didn’t respond just after kupokea Mpesa. So after two weeks is when she calls my nanny coz she was at the gate and was denied entry. Again! She had no money for transport back, that’s why she needed to see me; but if I’m not in, I’m not in,” she stated.

Things, however, took an unexpected turn two weeks later when the businesswoman turned up, inspected the suitcase and claimed that some bags were missing.

“When the security sent the bag to her she opens and says two bags are missing; excuse me, my compound is full of CCTV surveillance and no one cared to know whether you had left bags or bombs!! And for security reasons that’s why the suitcase has been taken to Banana Police Station.”

To Jane Mwangi, however, the script is different, one of betrayal.

In a widely shared post, Mwangi revealed that they go way back and claimed she was in attendance during Marua’s first baby shower.

“So unaniibia vitu zangu honestly, you are my high school friend, we went to high school together, I was there at your first baby shower when you were having Heaven. How do you treat somebody like a trash just because you thing you are a celebrity? How do you invite somebody to you house after tume have lunch, nimeacha vitu zangu, tumeongea story za biashara, even nikaji expose places mi hutoa vitu zangu because you said we are going to do business together,”  shared Mwangi.

She narrated that Marua was to allegedly partner with her in business.

“Lakini biashara sio hata lazima, but at least be a human being, coz I don’t understand hii story yote, hata nimeshindwa kwenda polisi, n ahata nimeshindwa kuchukua the remaining bags juu ninge chukua hata hakungekuwa na evidence. And on top of that inaniitia polisi Diana Marua. I feel so hurt and betrayed. I don’t what has been going on without you coz I’m so shocked,” she went on.

Related Topics:NewsTuko Talks
Up Next

SAD: Kenyan man – a US Navy Veteran – who was reported missing in 2020 found dead in Richmond, VA