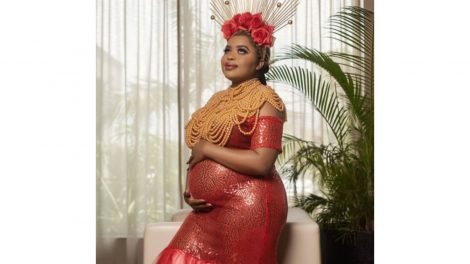 Popular radio presenter Mwende Macharia has announced that she is soon welcoming her second child this year after a seven-year motherhood gap.

“Behold I do a new thing. Joy unspeakable. After seven years, I am mom again,” she posted.

The mother of one has thanked God for her second child calling it a blessing in her life.

Mwende, however, has not revealed the identity of the father of her unborn child.

She sired her firstborn son with music producer J Blessing.

In an earlier interview, Mwende said she was at the time engaged to music producer and videographer and the two even planned to wed, but she realised he was not serious about the relationship after she was already pregnant.

Her first pregnancy came with a major backlash given she presented tv gospel show, Tukuza, and her fans expected her not to have a baby out of wedlock.

Born and raised in Diani, Mwende’s rise to media fame came with excessive scrutiny that one time saw her fans continuously tease her for her supposed poor fashion sense.

By NN
READ ALSO  UK asylum seekers hide to avoid being sent to Rwanda
Related Topics:Kenyan CelebritiesMwende MachariaNews
Up Next